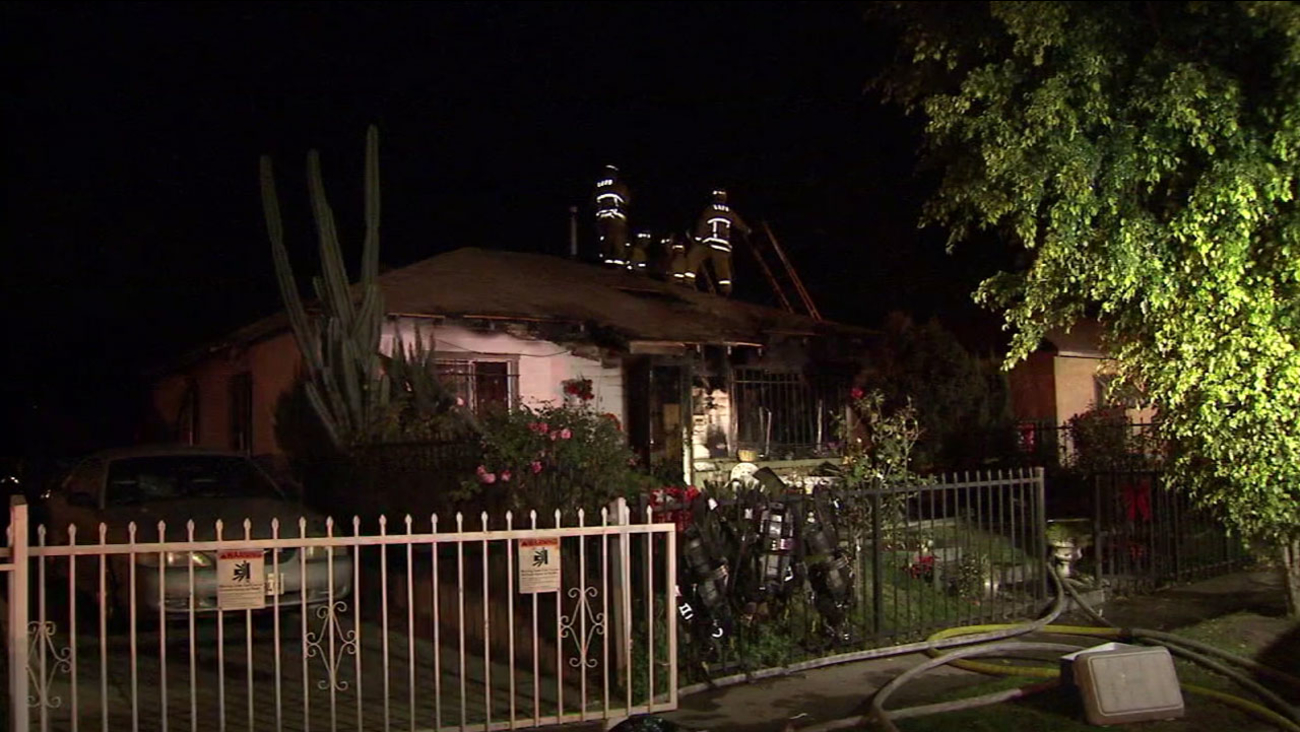 Firefighters looked over the damage and investigated the scene of a deadly house fire in Watts on Tuesday, Dec. 27, 2016. (KABC)

LOS ANGELES -- Two children died at the hospital, while their father was critically injured, after being rescued from a house fire in the Watts neighborhood Tuesday night.

The blaze broke out around 9 p.m. in the 800 block of E. 113th Street, according to Los Angeles firefighters. It was unclear what caused the fire.

The children and father were rescued and hospitalized. Firefighters said the kids were 2-year-old twin boys and had been in grave condition. Their father, who family identified as Benjamin Forston, 35, suffered facial burns trying to rescue his children.

A family member told Eyewitness News that the boys died at the hospital around 11 p.m.

The victims' uncle, Darryl Bullock, said all he knew was that the kids were in the hospital.

"Only thing I know is they unconscious...they're in the hospital and their father tried to save them," he said.

Firefighters also looked over the children's pregnant mother at the scene. She was then transported to the hospital for an evaluation.

Authorities later discovered that a third child, a 4-year-old girl, was also rescued from the home by a neighbor before firefighters arrived. She was found at a home and appeared to be uninjured but medics took her to a hospital for an evaluation.

The home was decorated for the holidays, authorities said, and there were six people inside: the two boys, 4-year-old girl, father, uninjured mother and grandmother. Family members said about 12 people lived in the home.

Firefighters said the mother and grandmother, who owns the home, were outside when it erupted in flames.

Firefighters said the fire was contained to the single-story, three-bedroom home, which was built in 1946 and was not equipped with optional fire sprinklers. Firefighters added that there was no immediate signs of functional fire alarms.

About 86 firefighters were working to put out the blaze, and it took about 20 minutes to knock it down.
Related topics:
californiachildrentwinschild deathman injuredhouse fireu.s. & worldlos angeles fire department
Copyright © 2021 KABC-TV. All Rights Reserved.
More Videos
From CNN Newsource affiliates
TOP STORIES