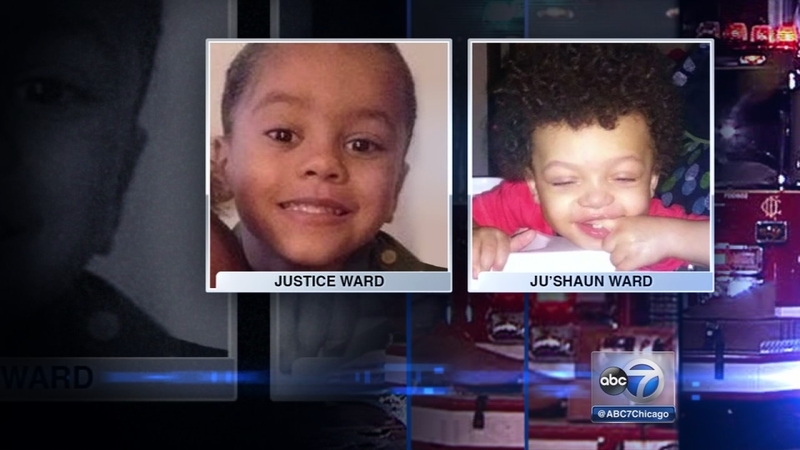 KANKAKEE, Ill. (WLS) -- Two brothers, ages 2 and 4, were critically injured in an apartment fire in Kankakee overnight. Their 55-year-old grandmother, a 22-year-old woman, a 25-year-old man and a firefighter were also hurt.

Investigators are trying to pinpoint what caused the three-alarm fire. They said it started in a rear stairwell, blocking some escape routes. Firefighters had to make several rescues.

Justice Ward, 4, and Ju'shaun Ward, 2, are struggling to survive. They were airlifted to University of Chicago Comer Children's Hospital and Loyola University Medical Center.

They were both trapped inside a second-floor apartment as it burned. The boys' mother and seven of their siblings, including an infant, made it out safely.

Their grandmother suffered smoke inhalation and was transported to Riverside Hospital in Kankakee. She told a relative, Harold Williams, about those frightening moments.

"Kids was hollerin' and screamin' because, you know, they didn't know where they was. So they had to feel through the smoke to try to get them out of there. So luckily the fire department came and kind of saved their lives," Williams said.

Firefighters arrived at the scene just before 2 a.m. Wednesday. The building, located in the 800-block of West Station Street, has two businesses on the first floor, eight apartments on the second floor and 22 residents.

"Upon our arrival, we had heavy smoke from the second story with numerous victims from numerous windows on the second floor," Kankakee Fire Chief Ron Young said.

The 25-year-old man jumped from a window. He was rushed to Riverside, where he's being treated for burns and a fracture. The 22-year-old woman was also taken to Riverside for burns. A firefighter had minor burns on his face. He was treated at the scene.

"It's heart-wrenching. The families upstairs... I'm more concerned about the kids than my business," Stevenson said.

Eight children and 14 adults were displaced by the fire. The Red Cross helped them find a place to stay.

Musician Mark Centner says he woke his roommates at 2 a.m. after a man pounded on his apartment door and told him to get out

"Literally the smoke was going through my eyes, and we got the hell out of there. And for the next 2 1/2 hours we watched it burn up," said Centner.

He was lucky, but a woman with two kids had more difficulty. Firefighters extricated them from the front window as their apartment filled with smoke.

"All of the doorways to the apartments fed into a single hallway, so they couldn't go out the front door to get out. That's why they went out windows," said Chief Ron Young, Kankakee Fire Department. "I'm proud of my people. I am proud of their professionalism and their courage."