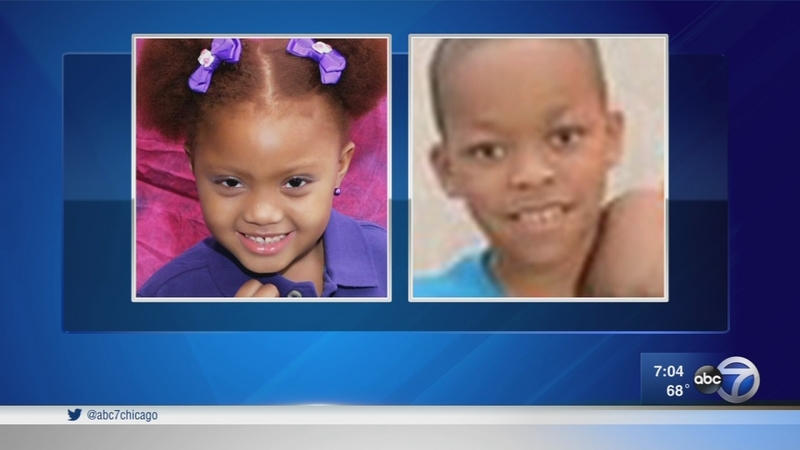 GARY, Ind. (WLS) -- Two children under the age of 10 were wounded Monday night in separate shootings about a mile apart in Gary, Indiana.

An 8-year-old girl was struck by a stray bullet around 5:15 p.m. while eating dinner at her grandparents' house in the 2100-block of Chase Avenue, police said. Family identified her as Harmoni Harton.

"She had taken two bites and we heard a bang. We thought the heat might have cracked the window, but she grabbed her chest and cried for a second. I raised her shirt and seen the bullet hole and the blood," said Felix Binion, Harmoni's grandfather.

Three bullets hit the home. One shattered a window, one went through metal piping under the sink and another went through the back door, right where Harmoni was seated, in front of her "Dora the Explorer" placemat.

She was shot in her left side. The bullet lodged and collapsed her lung.

"They must be mighty sick, to bother people that are not even... She was sitting there minding her own business, not bothering anybody," Harton said.

"Somebody shooting, doing senseless shooting. I guess the police said it could been as far as a couple streets over. But you know, bullets don't have a name," said Harmoni's other grandmother, Valerie Thomas Hopkins.

Harmoni was transported to Gary Methodist Hospital and airlifted to University of Chicago Comer Children's Hospital around 8:15 p.m. Hopkins said doctors were not able to remove the bullet. Harmoni remains in serious condition, but has stabilized.

The boy was transported to Methodist and was airlifted to Comer around 11:10 p.m. He also remains in serious condition and has stabilized.

Both children are expected to be OK.

Gary police said they don't believe the two cases are connected, but will find the people responsible.

"We are outraged. These two innocent children were injured - were harmed. The community needs to stand up. That's why we're asking for the community's help in this incident. That's why I have our elected officials standing with me. Something has to be done," Gary Police Chief Larry McKinley said Tuesday at a news conference.