WLS
1 / 7
CENTER TOWNSHIP, Ind. (WLS) -- An arrest warrant was issued Thursday for a man accused of running a puppy mill out of his northwest Indiana home.

Lake County Sheriff's deputies raided Stevce Rajcinoski's property on May 3 and rescued 68 dogs being kept in deplorable conditions in a barn in Center Township. Rajcinoski faces charges of animal mutilation, animal neglect and practicing veterinary medicine without a license.

Sheriff John Buncich said some of the dogs had never seen daylight. They were kept in a barn that he described as "filthy."

"Very sick individual, he doesn't have a license that we could find," said Buncich.

The deputies who rescued the dogs also found scalpels and other surgical equipment. Authorities said C-sections were performed on at least 11 of the dogs.

Dog carcasses were found buried behind the building.
The dogs are being cared for at the Lake County Adoption Center, a no-kill shelter. As of May 31, the Lake County Prosecutor's Office said that the dogs are not adoptable yet pending their investigation.

Since the dogs arrived earlier this month, the shelter said donations are pouring in from "all over" the country. However, they stressed there is a continuing need for blankets and monetary donations to cover the costs of the dogs' veterinary care.

The shelter said any donations may be dropped off or sent directly to them at 3011 W 93rd Ave, Crown Point, IN 46307.
Report a correction or typo
Related topics:
indianaanimal abuse
Copyright © 2021 WLS-TV. All Rights Reserved.
RELATED 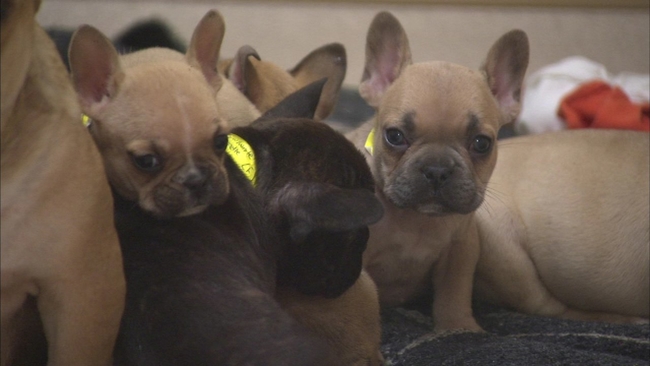