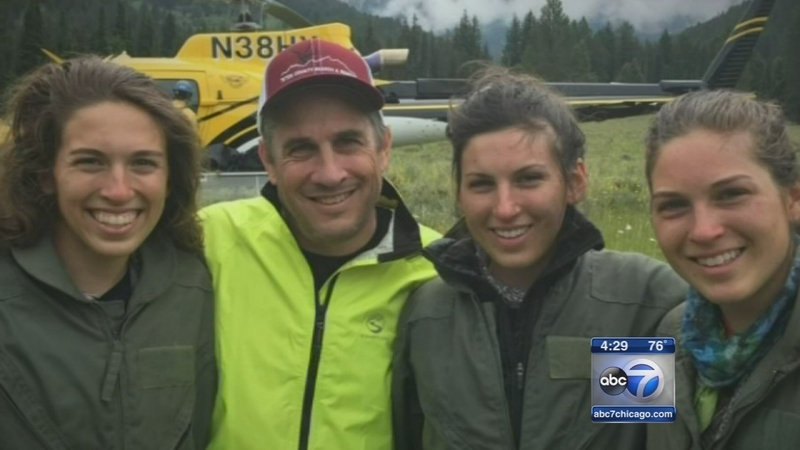 JACKSON, Wyo. (WLS) -- Three sisters who had been missing in the Grand Teton National Park in Wyoming for days were found on Thursday morning.

A guide spotted someone off a known trail, which led search officials to send a helicopter over an area near the top of the divide between Horse Creek and Little Horse Creek in the Gros Ventre Wilderness.

"Somebody that was in the hills yesterday had seen someone in a white coat, possibly a raincoat. Of course we had information that one of the girls had a white raincoat. So we followed up on that," Teton County Sheriff Jim Whalen said.

"They're tired, cold, hungry, but otherwise healthy and happy to be on their way out," Lori Iverson, public information officer with the Andrews Search and Rescue, said. Their location was about seven miles west of the trailhead where there car had been found.

"I was relieved. I started to cry, like you would as a parent. Losing all your kids at once is not an easy thing," Eric Andrews-Sharer, father, said. Relief replaced anxiety and anguish for family and friends. "They're great. They're in good spirits, good health, a little hungry. Kind of smelly, too."

The sisters are all experienced hikers. They left on June 28 for their backcountry trek, and were supposed to meet their mother in Chicago on Tuesday. When that day came and went, the search began in Wyoming, as did the prayers in White Fish, which is just 100 miles north of Chicago.

"There was a hopeful but very heavy sense of what was going on. Lots of tears. Lots of hugs of support," Pastor Justin Lowe, United Methodist Church, said. Lowe is friends with Megan.

Dozens of people combed the wilderness on horseback and foot and with dogs and helicopters. Their vehicle was located Wednesday at a wilderness trailhead in Bridger-Teton National Forest, which is 25 miles southeast of Jackson, Wyoming.

The three had spoken with a U.S. Forest Service employee before hiking into the wilderness, Iverson said

However, people and wildlife have carved out many alternate trails that can confuse hikers, Iverson said.

"It's very easy, even for experienced people, to get off course and make a wrong turn," she said. "So we simply suspect that the girls made a wrong turn and are looking for an egress out, maybe ending up in a location other than where their vehicle was."

Lowe said Megan definitely had a survival plan, probably more than one.

"I'm expecting to hear why the seven plans she had didn't work out. Because I've never seen her fail," Lowe said.

The sisters' mother has arrived in Wyoming. The family had planned another hiking trip in Switzerland, but Megan's friends said they're not sure the trio is up for another adventure.