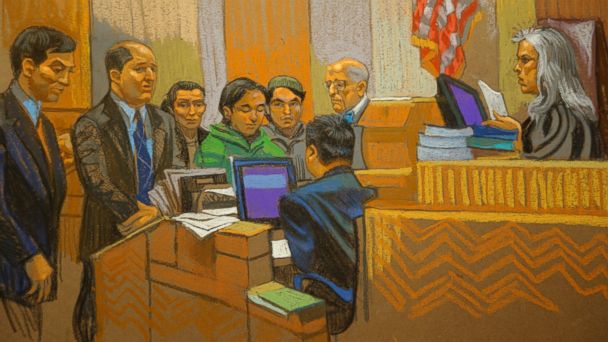 Three New York City men were arrested today on charges they allegedly conspired to join ISIS in Syria, while also trying to carry out attacks on the terror group's behalf in the United States, the authorities said.

The men had planned to travel to the Middle East and had also pledged to launch attacks in this country, including one on President Obama or planting a bomb in Coney Island, Brooklyn, federal officials said.

Federal officials said Akhror Saidakhmetov, 19, was arrested today at John F. Kennedy International Airport in New York, where he was attempting to board a flight to Istanbul.

Abdurasul Hasanovich Juraboev, 24, had a plane ticket to travel to Turkey sometime next month. He was arrested in Brooklyn, according to the feds.

Abror Habibov, 30, a third man, is accused of helping fund Saidakhmetov's efforts, authorities said. He was arrested in Florida.

The arrests came as FBI Director James Comey spoke today about how ISIS, also known as ISIL, is recruiting members through its use of social media and propaganda.

"ISIL in particular, is putting out a siren song through their slick propaganda through social media that goes like this: 'Troubled soul, come to the caliphate, you will live a life of glory, these are the apocalyptic end times, you will find a life of meaning here fighting for our so-called caliphate and if you can't come, kill somebody where you are." That is a message that goes out to troubled souls everywhere," he said.

In August 2014, Juraboev allegedly posted this message on an Uzbek-language site of ISIS: "I am in USA now. ... But is it possible to commit ourselves as dedicated martyrs anyway while here? What I'm saying is, to shoot Obama and then get shot ourselves, will it do? That will strike fear in the hearts of infidels," according to the criminal complaint.

A week later, the FBI met with Juraboev twice. He allegedly told them that he believes in ISIS' terrorist agenda and that he would like to go to Syria to fight with ISIS "if Allah wills," authorities said.

He also told them he would harm Obama if he could, based on president's role in killing Muslims, his support for Israel and recent bombings of ISIS. Juraboev allegedly said he didn't have an imminent plan to harm Obama, but that if anyone within ISIS told him to, he would, authorities said.

Undercover FBI agents had twice met with Juraboev, where he again professed his loyalty to ISIS and repeated his claims that he would kill the president should the terror group ask him to, authorities said.

"ISIL calls on its followers to come fight for the terrorist organization in Syria, and in messages to followers outside Syria, ISIL has called on them to attack police, intelligence officers or the military in their home countries including the United States," said NYPD Police Commissioner Bill Bratton. "By pledging allegiance to ISIL, these defendants conspired to fight for a designated foreign terrorist organization either in Syria, or even New York."

In one November 2014 discussion, Saidakhmetov allegedly suggested he join the U.S. military so he could pass military information to ISIS -- and if his plan ever fell apart, he could open fire on American soldiers, according to the charging documents.

And then just last month, Saidakhmetov said he could buy a machine gun and "shoot all police" before "go[ing] to the FBI headquarters" to "kill the FBI people," authorities said.

"It was made quite plain based on those statements that if they were not able to go [to Syria or Iraq], that they would seek to acquire weapons here .. and seek to attack," Bratton said. "Those aspirations were made quite clear."

Nevertheless, by that time, Saidakhmetov and Juraboev had purchased tickets to fly to Turkey, a known destination point for those looking to sneak into Syria, the charging documents say.

"The defendants looked to join the Islamic State of Iraq and the Levant, by flying to Turkey in a vain attempt to evade detection. And several of the defendants planned to commit acts of terror here -- in America -- if they could not travel, to include killing FBI agents," added FBI Assistant Director-in-Charge Diego Rodriguez. "The defendants violated the true tenants of their faith in pursuit of their radical, violent agenda. We rely on help from the community, the public and religious leaders to be mindful of those who could be radicalized. We cannot do this alone."

Saidakhmetov is a Brooklyn, N.Y., resident and citizen of Kazakhstan. Juraboev and Habibov also live Brooklyn and are citizens of Uzbekistan.

The men have been charged with attempt and conspiracy to provide material support to a terrorist organization.

Habibov was arraigned this afternoon in Jacksonville, Florida. His alleged accomplices appeared in federal court in Brooklyn. All three were detained.

Adam Perlmutter, a defense attorney for Saidakhmetov, said, "It is my hope that in America that the presumption of innocence still holds and added that the "U.S. government needs to find another way to approach Muslim men who could be radicalized."

If convicted, the men each face a maximum sentence of 15 years behind bars.