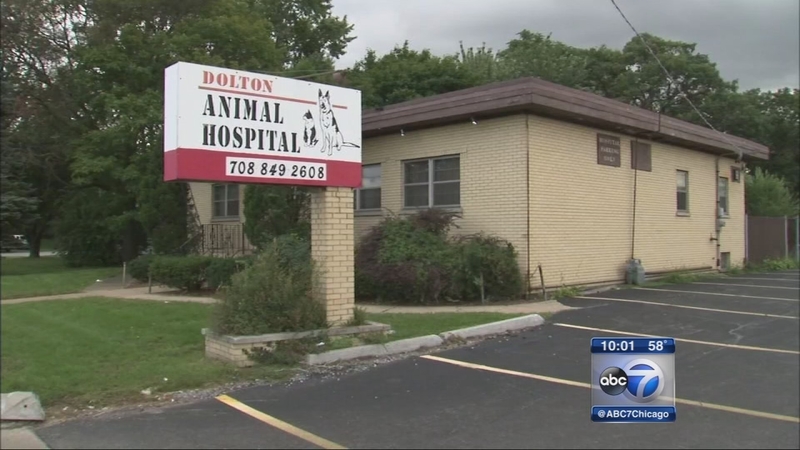 DOLTON, Ill. (WLS) -- Several dead animals were removed from an animal hospital in the suburbs and the Cook County Sheriff's Department is investigating.

Other animals that are in bad health have also been taken away.

Every animal that was inside the Dolton Animal Hospital was removed. There were dead animals and dogs close to death. Police have no idea what went on inside, but they are in the process of interviewing an animal hospital employee.

A scared puppy. Another dog is nothing but skin and bones. These are the dogs that survived. Four did not. While they were dropping off a stray dog Sunday morning, Dolton Police officers made a gruesome discovery in the basement of the Dolton Animal Hospital.

"Once the officer arrived, he saw the conditions, he investigated a little bit further and at that point he advised his supervisor, and his supervisor called Cook County Sheriffs Police," said Dolton Mayor Riley Rogers.

Cook County Sheriff's Police say in some of the cages there was no food or water, feces and urine were everywhere.

"There was a fair amount of neglect going on in this facility, absolutely, no doubt about that. You saw the dogs when they came out, they were very close to dying," Dep. Chief Anton said.

Police have no idea why an animal hospital would neglect its animals. A hospital employee showed up at the scene and she was taken into custody for questioning. The veterinarian was not present.

Police say the investigation is just beginning. The Village of Dolton has had a long-time agreement with the hospital to drop off strays, even when the facility is closed. The hospital gets a fee from the village to take care of the strays.

"As far as we know, we have not had any complaints here," Dep. Chief Anton said.

While there have not been any complaints about what goes on inside the facility, the mayor said that just last week, the village did issue some citations for problems they were having outside the building.

Meanwhile, of the 14 animals that were removed Sunday, 12 of them were strays. Two of the dogs did have owners and police are now trying to reach out to those owners.