NAPERVILLE, Ill. (WLS) -- A Packers fan living in Bears territory made a giant snow homage to his beloved team. And it's attracting attention in west suburban Naperville.

Chuck Rohlfs is a teacher and a die-hard Green Bay fan. He built a 16-foot green Hulk made of snow in his front yard to honor his team.

Wife Kay Bonsall said her husband tirelessly grabbed buckets of snow from his back yard and neighbors' yards to create the Incredible Hulk snowman. It took him two days to sculpt it for Sunday's game, in which the Packers lost, sending the Seattle Seahawks to the Super Bowl.

But Bonsall says Bears fans and residents aren't giving him too difficult a time, especially since the Packs lost.

"Drove by it the other day, thought they were making an archway," said ABC 7 Chicago fan Pam Shoemaker, who sent in the photo. "Drove by this morning & there stood this enormous Hulk." 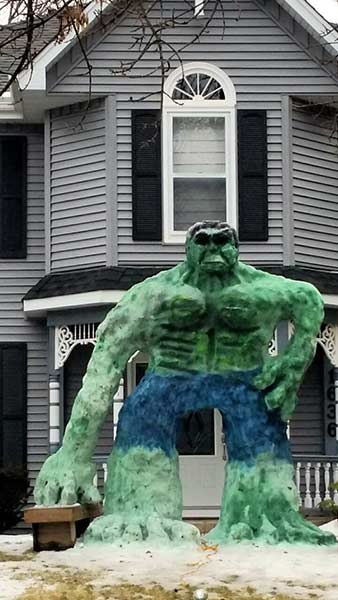