762 murdered in Chicago in 2016, CPD releases plan to curb violence CHICAGO (WLS) -- Chicago police have released crime statistics from 2016, with a police spokesman calling it an "unacceptable rise in violence."

But at Sunday's press conference, it was about looking forward, not backward.

In unveiling the department's crime-fighting strategy for the upcoming year, Johnson spoke of three pillars:
1. Addressing the flaws in sentencing guidelines for repeat gun offenders, who are blamed for most of the city's gun violence.

2. Targeted, data-driven enforcement, led by the launch of new intelligence centers on the south and west sides

And while much of the press conference was aimed at showcasing the tools and technology being launched at these new intelligence centers, Johnson's toughest words were aimed at legislators, who despite continuous calls from the department in recent years, have not moved to toughen sentences for repeat gun offenders.

"If you're a leader or policy-maker that has anything to do with Cook County or the city of Chicago you should find it reprehensible that we had over 700 homicides last year. That's just unacceptable. And if you think that's okay, then I have a problem with you," Johnson said.
Johnson also said the department expects to add nearly 1,000 officers by 2018 and said body cameras, which are now in use in seven police districts, will become universal by the end of 2017 as the department strives to become more transparent.

On Saturday, more than 700 crosses were carried down Michigan Avenue, led by Father Michael Pfleger. They represented each life lost due to violence in the city of Chicago in 2016.

The crosses were handmade by a man named George Zanis, who has been building memorials, in Aurora, for mass shootings like Newtown and Orlando.
Police are blaming the vast majority of the violence on gangs and illegal guns on the streets. They took 8,300 guns off the streets in 2016, which police said is a 20 percent increase from 2015. 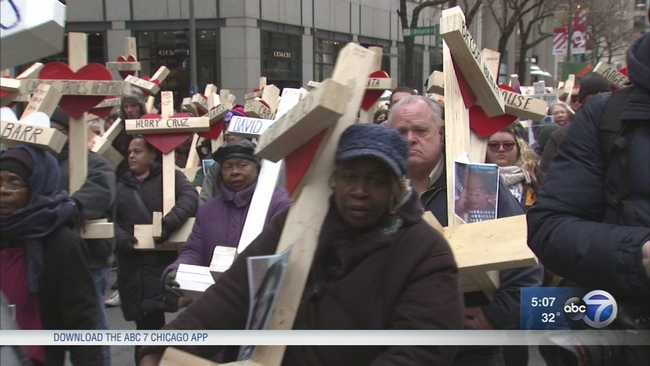