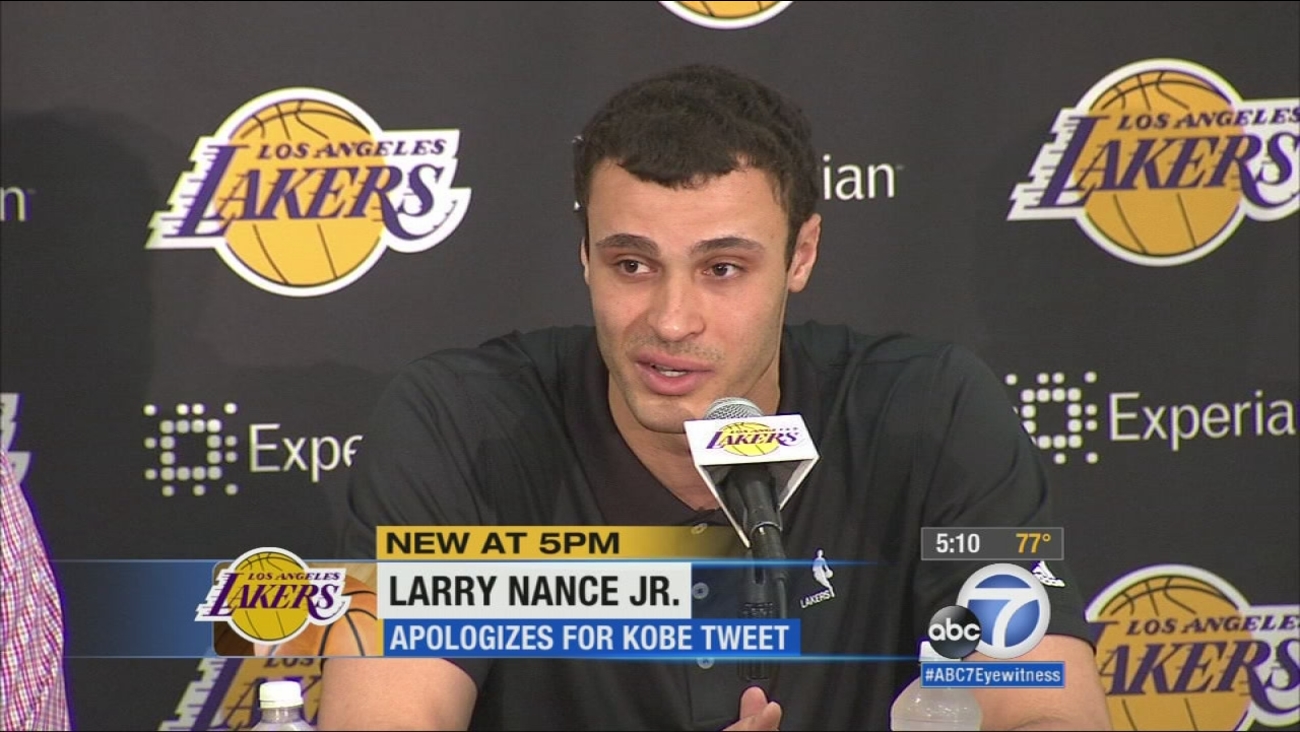 Lakers draft pick Larry Nance Jr. talks about the moments after his critical tweet of Kobe Bryant surfaced at a news conference on Monday, June 29, 2015. (KABC)

LOS ANGELES -- The Los Angeles Lakers introduced their draft picks to Los Angeles Monday, giving fans a look at the future of the franchise.

First-round picks D'Angelo Russell and Larry Nance, Jr. and second-round pick Anthony Brown all hope to play important roles in the Lakers quest to become one of the NBA's elite teams once again.

But Monday's news conference wasn't just about the future, it also brought up the past.

The Lakers took Nance as the 27th pick in the first round, and moments later an old tweet he posted in May 1, 2012 went viral.

The tweet read: "Gee I sure hope Kobe can keep his hands to himself in Denver this time." It also included the hashtag "#rapist."

Bryant was arrested and accused of sexual assault in Colorado in 2003. The criminal charges were dropped a year later, and Bryant settled a civil lawsuit.

The tweet was deleted within minutes of his selection.

"I felt like I was going to throw up. I was just sick to my stomach, embarrassed in myself. I felt so bad about what I said and I just wanted to apologize to him right away," Nance said.

Bryant has since said that the incident is "water under the bridge."

"The kid figured it out himself," Bryant said at the BET Experience. "He's a kid, man. He actually sent me a great message (Friday), which is really funny. I looked at it (the message), and it was like, 'This is when you know it's about time to hang these things up, when your teammate writes you, Hi, Mr. Bryant.'

"I was like, 'What the f---?' But it was really nice and apologetic about what had happened. I said, 'Dude, listen. We've all said things and done things that we regret and wish we could take back. It's water under the bridge, man. Welcome to the team.' He writes back, 'Thank you, sir.'"