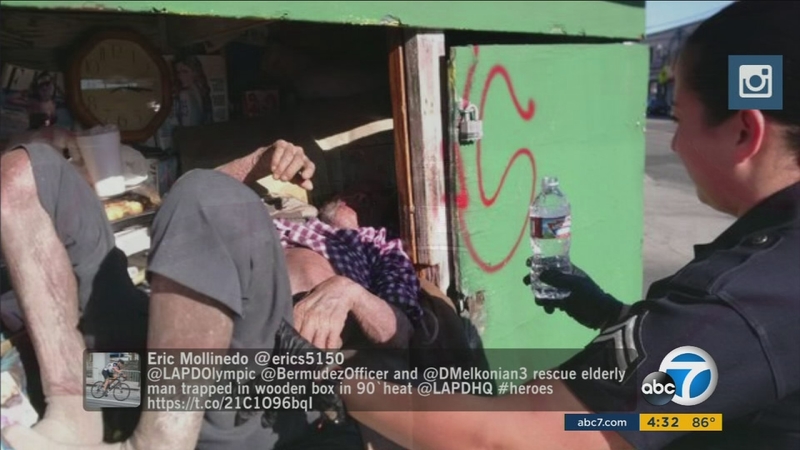 HARVARD HEIGHTS, LOS ANGELES -- An elderly man who sells newspapers from a stand in Los Angeles' Harvard Heights neighborhood is safe in the hospital thanks to a Good Samaritan who called police after the vendor became stuck inside his wooden stand for several days.

A photo taken and tweeted out by a Los Angeles police officer who helped pull the elderly man out went viral.

The 84-year-old was rushed to a local hospital where he was in stable condition, and as one officer put it, he was lucky to be alive.

"Very fortunate, especially with the heat wave that we're having these last few days," said Dikram Melkonian of the LAPD. "I mean, the situation in that tight spot and the heat going on, and he was completely undernourished, and his dehydration level was so low, so weak and lethargic."

Melkonian said he was grateful the unidentified man was found in time and that the public reported what they saw.

People who own businesses and work near Western Avenue and Pico Boulevard said they know the victim simply as the newsstand guy and are unaware of his name.

Some said they were shocked to hear the newsstand was also the man's home.

Patricia Columbus runs the nearby donut shop and said he's been a fixture in the area for the 25 years her family has been there.

"He would come in once in a while and get a hot chocolate and maybe every few days," she said. "I just heard about that this morning, and I'm really shocked, and I hope he's OK."

Police don't suspect foul play and said the elderly vendor may have accidentally trapped himself inside and didn't have the strength to break out.

"One of the citizens that talked to us stated that he lives there, he sleeps there at night," Melkonian said. "The doors to the location are ajar but for some reason they were closed that day when we found him."