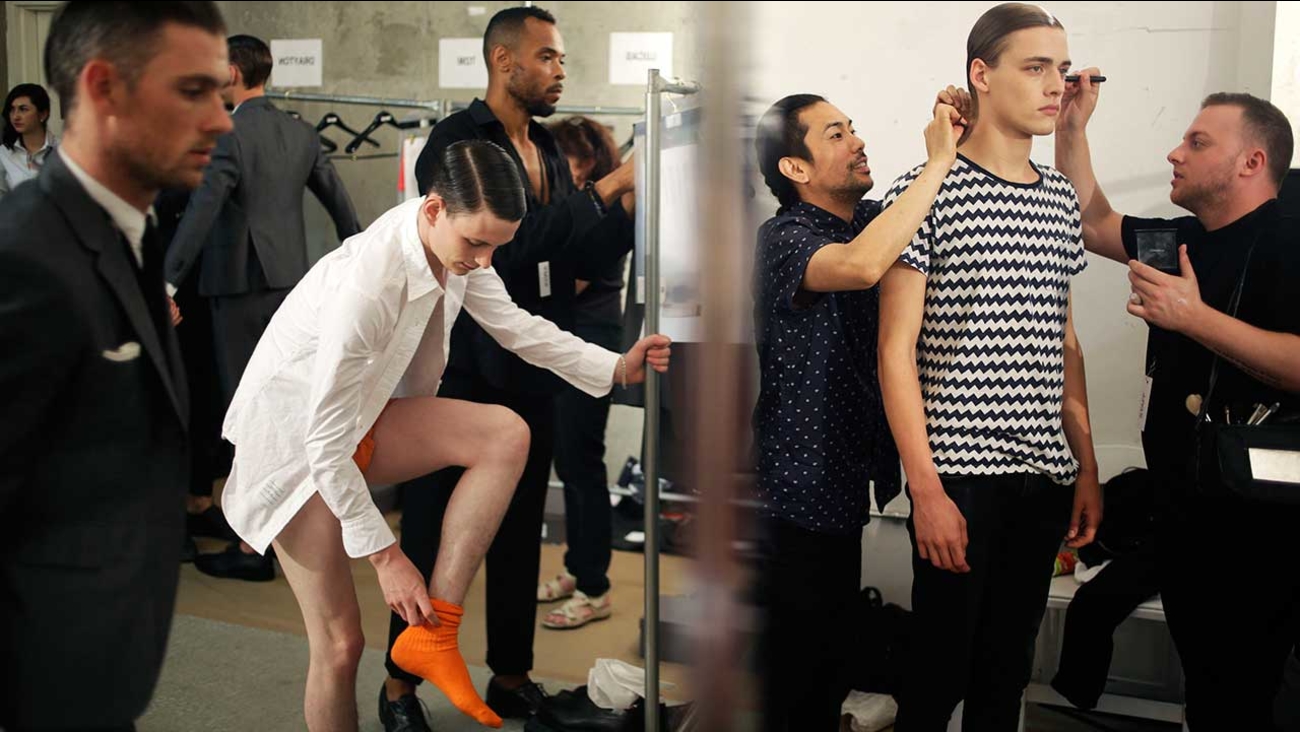 NEW YORK -- New York Fashion Week has always celebrated the glamour of women's fashion, but has relegated menswear to a supporting role. This week,building on a growing public appetite for men fashion, the industry is putting on the first standalone men fashion week in New York in 15 years (a brief attempt fizzled in the late '90s.) Here are some highlights of New York Fashion Week: Men.

CLASSIC OFFICE ATTIRE, BOTH RETRO AND FUTURISTIC, AT THOM BROWNE

For most designers, "uniformity" would hardly be a goal. But Thom Browne, both a great technician and a great showman, happily embraces the concept in his new collection of men's suits.

"Yes, we're celebrating uniformity," Browne said backstage at a Chelsea gallery, where his classic, cropped-leg suits were on display inside a mirrored cube that resembled an office, retro and futuristic at the same time. "The suit is every guy's uniform."
Observers were ushered slowly into the cube, actually a small room with mirrored floor, walls and ceiling. In the center was a classic office desk, upon which sat an old-fashioned typewriter, a pair of scissors and a stapler - the "old-school" office, Browne quipped (no laser printers or scanners anywhere.) Everything was in bright, shiny silver, except of course for the models in their dark sunglasses and their suits in various shades of gray, hems above the ankle in signature Browne style. It was a little like "Mad Men" meets Stanley Kubrick.

Browne explained that this new collection - aptly named "the officeman" - was also a celebration of his new role as tailor-shop owner. Three months ago, he bought the Queens factory of his longtime master tailor Rocco Ciccarelli, bringing the operation in-house. Soon, he plans to move it into midtown Manhattan. "Having my own tailor shop is something I've always wanted to do," he said.

Browne's famous suits will be Made in New York, he notes, by the tailors he deems the best in the world.

"It's a story everyone needs to know," he said.

The hot young brand Public School put its models in glassed rooms for a series of jailhouse lineups.

"No. 3, step forward," a recorded voice commanded at one point during the packed presentation. He obliged.

The spring/summer 2016 collection in the brand's signature palette of black, white, gray and navy was a mix of athletic details with crisp tailored trousers - short and long - and lapelled jackets - sleeveless and not. Slouchier jackets and pullovers had windowpane detailing.

The solids were broken up by a few plaid shirts, and designers Dao-Yi Chow and Maxwell Osborne showed off the brand's PS platform leather sneakers in black and white.

Chow said the two wanted to take the brand back to its New York roots. Asked about the jailhouse theme, he joked in an AP interview: "These are the unusual suspects."

More seriously, Chow said the theme included looks that evoked the brand's basic uniform but "in a backdrop where you might normally see or expect to see something else, a group of people who have been contextualized and marginalized in this particular setting."
He added: "The message is about solidarity and unity, especially in these times that, you know, when you are lined up side by side, no one is better or worse than the person standing next to them."

Joe Jonas, Darren Criss and Jesse Metcalfe were among celebs who took in the show.