WLS
CHICAGO (WLS) -- A 94-year-old grandmother who is a World War II veteran was still in pain Sunday night with broken ribs and a concussion she sustained from a brutal attack outside her home last week.

"It hurts me to breath," said Josephine Regnier in an exclusive interview Sunday, a day after she was released from the hospital.

Earlier Sunday, Olajuwon Claiborne, 26, of Chicago, was charged in her attack, which occurred 11:30 a.m. Wednesday outside her building in the 5100-block of South Long Avenue in the city's Garfield Ridge neighborhood.

She was waiting for her daughter, Judy Dusk, to pick her up to go to the dentist. Police said the suspect pushed Regnier into the hallway of her building. He hit her and stole her purse.

A judge denied him bail. "Good, nobody else has to go through what I went through," Regnier said.

Claiborne is scheduled to appear in court Dec. 16.

Regnier said the robbery blindsided her, but has received an outpouring of support from strangers.

"People have really been nice," Regnier said. "I don't even know some of these people and they send me flowers and candy, I have no way to thank them, but maybe now they will hear me."

Claiborne was captured on surveillance video at a nearby pizza place, Villa Rosa Pizza.

Jimmy Pieprzyca, of Villa Rosa Pizza, said they quickly turned the video over to police and didn't learn until later that one of their delivery people is Regnier's daughter. The pizzeria offered a $5,000 reward in the case for the person who came forward with information that led to the arrest.
Related topics:
garfield ridgecar crashpurse snatchingbeatingstolen carsurveillance video
Copyright © 2020 WLS-TV. All Rights Reserved.
RELATED 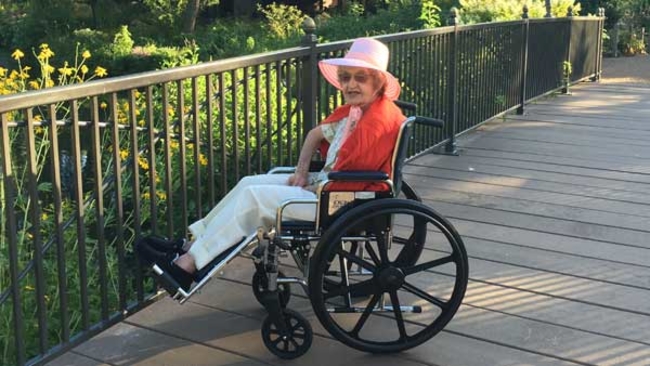