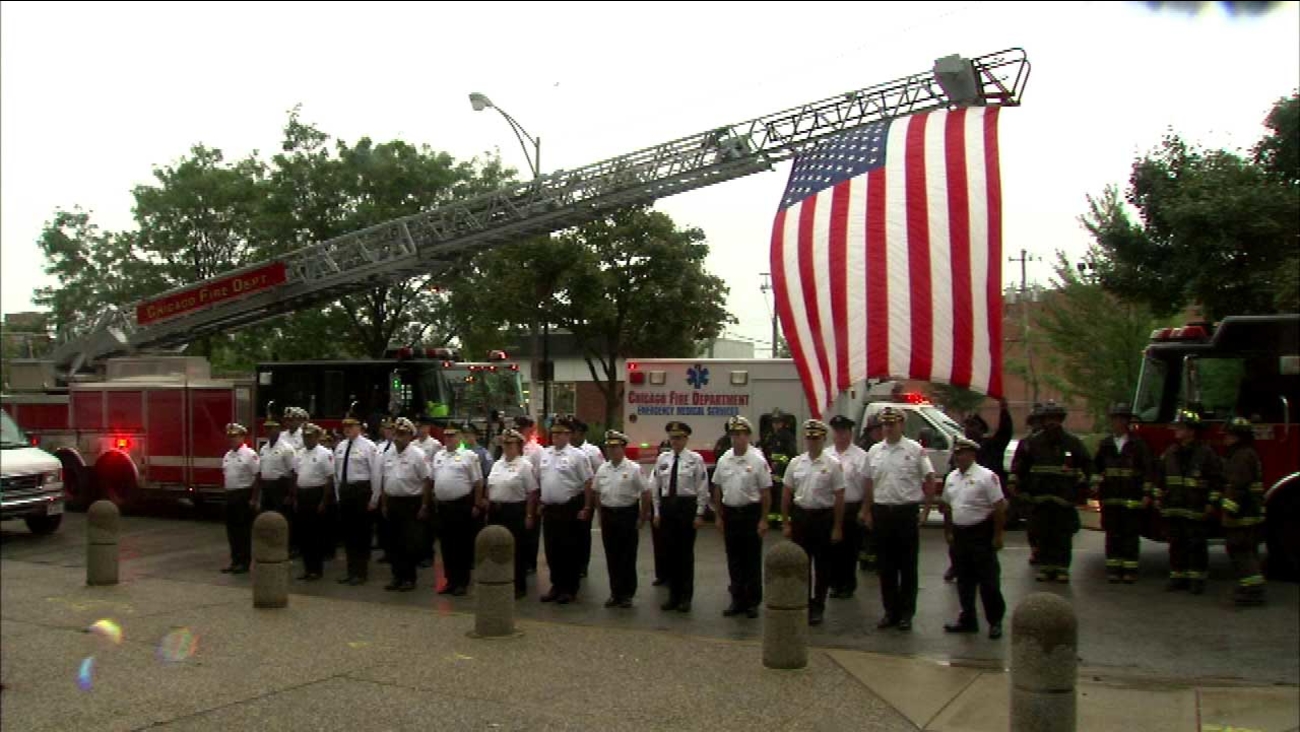 The Chicago Fire Department had a moment of silence as part of their Sept. 11 remembrance on Friday.

In Chicago, Chicago Fire Department members had a moment of silence at 7:46 a.m. - the moment the first airplane struck the north tower of the World Trade Center - to remember the hundreds of officers with the police and fire departments for New York City and the Port Authority who died on Sept. 11.

Gov. Bruce Rauner issued a proclamation that declared as Patriot Day in Illinois. All entities governed by the Flag Display Act are ordered to fly the United States and state flags at half-staff in honor of the victims of 9/11.

Other events are listed below:

Crystal Lake South High School, Crystal Lake (5:30am-7am) - Staff and students will honor Crystal Lake and Lake in the Hills police, fire, and rescue crews for their service by giving them breakfast.

North Riverside Plaza, Chicago (7:30am/9am/noon) -- The Plaza Project along with Vibeup will host a series of community yoga classes at the plaza. The free event will allow people to donate money that will go to the Illinois Patriot Education Fund. Each class will begin with a silent meditation paying homage to those that died.

Astellas Day of Service (various locations) -- The company has pledged a total of 10,000 volunteer hours as they mark the anniversary with a day of service in the community.

Chicago Public Safety Headquarters (7:30am) -- Members of the Chicago Fire Department will take part in a moment of silence to remember the hundreds of public safety officers in the police and fire departments of NYC and the Port Authority of NY who died in the collapse of the World Trade Center Towers.

Gary City Hall, Gary, Ind. (8am) -- Mayor Karen Freeman-Wilson joins her police chief and fire chief and others for their annual ceremony.

St. Mary of Gostyn Church, Downers Grove (8am) -- All police, firefighters, sheriff's deputies, and ems workers are invited to take part in the church's blue mass of remembrance honoring those that died.

Uno Charter Schools (various in Chicago) (8am-9:11am) -- The school network has several public memorials and remembrances this morning at several of their schools.

Lisle-Woodridge FD Station 51, Lisle (8:30am) -- Firefighters will gather for a joint honor guard and bell ceremony along with 21 gun salute and taps.

Wauconda 9/11 Heroes of Freedom Memorial, Wauconda (9am) -- Ceremony to remember survivors and people affected by the attacks.

St. Mary of the Woods, Chicago (9am) - For the second year in a row, the Catholic school will remember first responders and civilians killed on 9/11 and honor law enforcement and members of the military during a special mass.

Elgin City Hall, Elgin (9am) -- The city along with American Legion hosts a ceremony. They will have an honor guard, bell ringing, taps, and benediction.

Veterans Memorial Park, McHenry (9am) -- Police and firefighters will mark the anniversary with a ceremony and moment of silence.

Palatine Firefighters Memorial, Palatine (9am) -- The village hosts their ceremony that will include current and retired fire department members marching to the site from Fire Station 85 and will place a wreath at the memorial along with a bell ringing.

Hoyne Elementary, Chicago (10:50am) -- Students will walk around the school 11 times to honor the memory of the victims who died on 9/11. They are also asking their kids to do one good deed in the community.

Highwood City Hall, Highwood (11am) -- The city will unveil a sculpture containing a remnant of the World Trade Center Tower. The bronze and steel piece depicts a fireman taking a moment to acknowledge those who perished that day.

Oak Brook Village Hall, Oak Brook (11am) -- The village will their annual ceremony, which includes a color guard, patriotic songs and speakers.

Urban Edge Gallery, Waukegan (11am-8pm) -- The city will open an art exhibit that remembers those who have served. The artist was an embedded photojournalist in Afghanistan. The exhibit will be open through Veterans Day.

Quinn Chapel, Chicago (1pm-2pm) -- U.S. Education Secretary Arne Duncan will participate in a service project. He join Public Allies of Chicago to remember 9/11 victims as well as the nine people who died in the Charleston church shooting.

Cricket Hill at Montrose Beach, Chicago (2 pm) -- People are welcome to walk the lakeshore with wounded warriors from the No Barriers Program. They will start their 3-mile walk at Cricket Hill in a walk that's meant to empower veterans who have disabilities.

Lemonaid 2015, River Forest (3pm-7pm) - The Bonnie Brae Lemonaid Stand is run by kids and gets huge crowds. This is their 14th year and this year will benefit NAMI Metro Suburban and PACTT Learning Center, both organizations that helps people with disabilities.

Commander Dan Shanower Memorial, Naperville (5:45pm) -- The Naperville Exchange Club takes the lead on the town's annual ceremony. The memorial is behind the municipal center along the riverwalk. The municipal band plays patriotic music at 5:45pm and the program will start at 6 p.m. Program features retired NYFD Capt. Michael Dugan, who will share the story of how the day before his company held a celebration to rededicate its firehouse. The next day, 11 men at that event didn't survive the attacks.

Motor Gallery, Chicago (6pm-10pm)-- A new exhibition is being opening with a reception called "Warriors of the Apocalypse - Bring Down the System." A performance and pop-up art exhibition contemplates 9/11 and the future of the U.S. centered around 9/11 and personal freedom of citizens.

Pritzker Pavilion, Millennium Park, Chicago (6:45pm) -- The Lyric Opera of Chicago launches its new season with the 15th annual stars of Lyric Opera concert. The free outdoor concert is at 7:30 p.m. At 6:45 p.m., members of the U.S. Air Force Band of Mid-America will perform patriotic music.