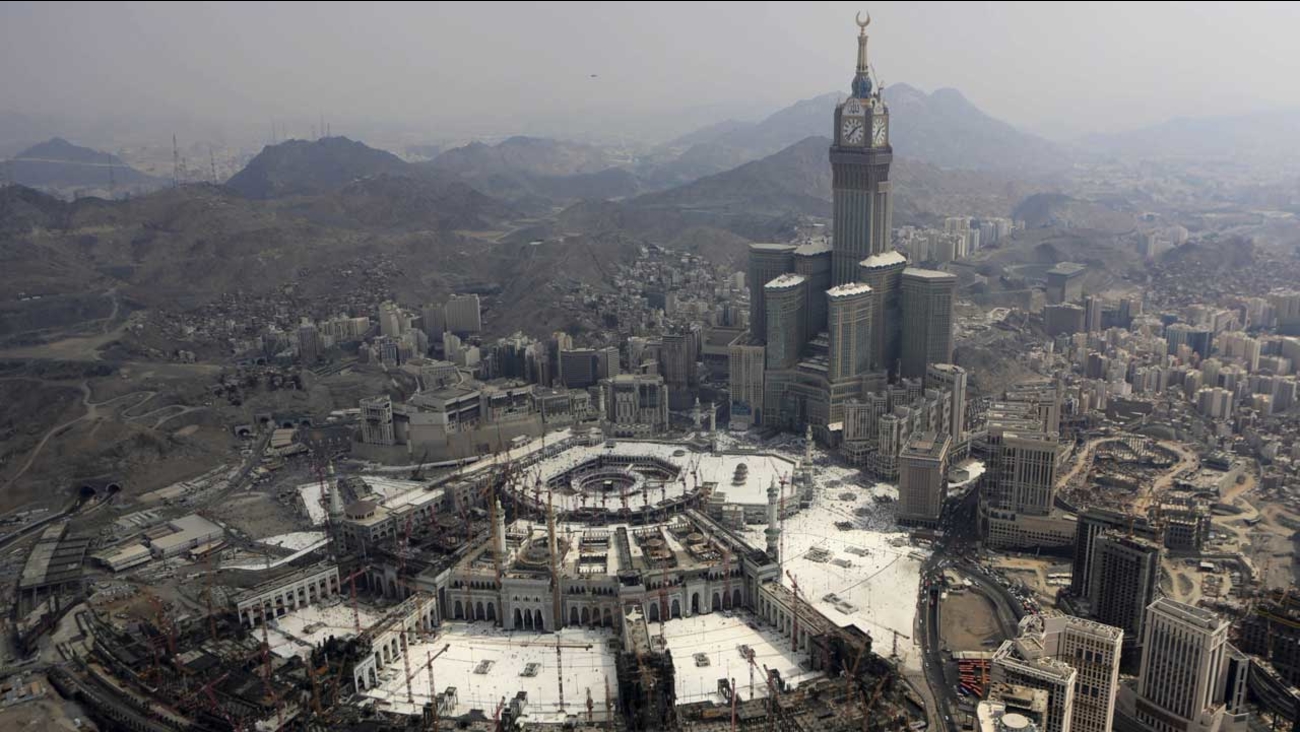 (FILE) The Abraj Al-Bait Towers with the four-faced clocks stands over the holy Kabaa, as Muslims encircle it inside the Grand Mosque.

RIYADH, Saudi Arabia -- A towering construction crane toppled over on Friday during a violent rainstorm in the Saudi city of Mecca, Islam's holiest site, crashing into the Grand Mosque and killing at least 107 people ahead of the start of the annual hajj pilgrimage later this month.

Images posted by social media users showed a grisly scene, with police and onlookers attending to numerous bodies lying amid pools of blood on the polished mosque floors.

Saudi Arabia's civil defense authority provided a series of rising casualty numbers on its official Twitter account as ambulances whisked the wounded to area hospitals. As of early Saturday, it said those injured in the disaster numbered 238.

A photo released by the authority showed police and workers in hardhats inspecting a pile of collapsed concrete slabs inside a part of the sprawling, ornately decorated mosque. Another showed the base of the toppled red-and-white crane tilted upward at a sharp angle.

Images aired on Saudi state television showed the crane's metal boom smashed through what appeared to be the roof of the mosque.

Ahmed bin Mohammed al-Mansouri, the spokesman for the presidency of the Mecca and Medina mosque affairs, said in a statement carried by the official Saudi Press Agency that the accident happened late Friday afternoon during a severe storm carrying strong winds and heavy rain.

Authorities did not provide details on the victims' nationalities, but it was likely that the tragedy will touch several countries.

U.S. Secretary of State John Kerry expressed his condolences and said the U.S. stands with Saudi Arabia and "all Muslims around the world in the aftermath of this dreadful incident at one of Islam's holiest sites."

The Grand Mosque and the cube-shaped Kaaba within it draw Muslims of all types from around the world throughout the year, though numbers increase significantly in the run-up to the hajj. The mosque is Islam's holiest site to which Muslims face in daily prayers and a central site among the hajj rituals.

Performing the pilgrimage once during one's lifetime is a duty for all able-bodied adult Muslims. This year's pilgrimage is expected to start around Sept. 22.

Al-Mansouri said the crane, which was being used in construction work at the mosque, struck a circular area around the Kaaba and a nearby walkway.

Pan-satellite Al-Jazeera Television broadcast footage from inside the mosque compound said to be from the aftermath of the accident, showing the floor strewn with rubble and what appear to be pools of blood.

Another video, on a Twitter posting, captured the apparent moment of the red-and-white crane's collapse during a heavy rainstorm, with a loud boom, screams and confusion.

The governor of the Mecca region, Prince Khalid al-Faisal, quickly called for the formation of a committee to investigate the cause of the accident. He directed all appropriate authorities to provide support for all of those injured, according to a statement from Mecca principality public affairs head Sultan al-Dosari that was carried on SPA.

Other Saudi officials could not immediately be reached or referred queries to the civil defense statements.

Several cranes surround the mosque to support an ongoing expansion and other construction work that has transformed the area around the sanctuary.

Steep hills and low-rise traditional buildings that once surrounded the mosque have in recent years given way to shopping malls and luxury hotels - among them the world's third-tallest building, a giant clock tower that is the centerpiece of the Abraj al-Bait complex.

The Binladin family has been close to the ruling Al Saud family for decades and oversees major building projects around the country. The Binladen family disowned one of its many members, late al-Qaida leader Osama bin Laden, in the 1990s.

It was not immediately clear who owned the crane that collapsed.

During the week of the hajj, Muslims converge on Mecca to perform a series of rituals, including the circling of the cube-shaped Kaaba, praying and holding vigil at Mount Arafat and perform the symbolic stoning of the devil by throwing pebbles at the three pillars in Mina.

Prayers on and around the mount are a climactic emotional and spiritual moment in the hajj. The faithful believe that on that day the gates of heaven are open, prayers are answered and past sins are forgiven.

All male pilgrims, regardless of wealth or status, wear seamless terry white cloths to symbolize equality before God during the hajj. Women cover their hair and wear long loose clothing, forgoing makeup and other adornments to help them detach from worldly pleasures and outward appearances.

It was on Mount Arafat, marked by a white pillar, where Islam's Prophet Muhammad is believed to have delivered his last sermon to tens of thousands of followers some 1,400 years ago, calling on Muslims to unite.

While following a route that the prophet once walked, the rites are believed to ultimately trace the footsteps of the prophets Ibrahim and Ismail, or Abraham and Ishmael as they are named in the Bible.

The millions of pilgrims who visit the country's holy sites each year pose a considerable security and logistical challenge for the Saudi government, and large-scale deadly accidents have occurred on a number of occasions in years past.

In 2006, more than 360 pilgrims died in a stampede at the desert plain of Mina, near Mecca. A crush of pilgrims two years earlier left 244 dead.

The worst hajj-related tragedy was in 1990, when 1,426 pilgrims died in a stampede in an overcrowded pedestrian tunnel leading to holy sites in Mecca.