WLS
By Paul Meincke
CHICAGO (WLS) -- A judge ordered the release of Alstory Simon, whose confession to a 1982 double homicide helped free an inmate from death row in 1999.

Simon has been in prison for 15 years for the double murder, the same case in which Anthony Porter was convicted and later freed.

State's Attorney Anita Alvarez has now concluded that Simon's confession was a false one, and he will now be freed from a downstate prison.

As you would expect, Simon says he feels wonderful to be a free man again. He even gave reporters a thumbs-up after he got into a car that took him away from prison.

"I'm not angry. At first I was angry when I first came in here. And I was very bitter. Like when a person would say hello to me, I'd cuss 'em out, you know, I'd be ready to fight, you know. Then I thought about it, and I got to let that go," he said.

Simon later said he was hoodwinked into confessing by a journalism professor, a private eye, and a defense attorney. After a year-long investigation, Alvarez says Simon's case is so deeply corroded and corrupt that restoring his freedom is the right thing to do.

In the double homicide, which occurred 32 years ago, two teenagers were shot to death in a South Side park. Porter, an alleged neighborhood gang banger, was convicted. Two days from his scheduled execution, Porter was freed after Simon confessed, saying he did it in self-defense. Soon after being sentenced to prison, Simon said he'd been tricked - and that he didn't shoot anyone.

During a press conference Thursday, Alvarez said that Simon was victimized by former Northwestern journalism professor David Protess and private investigator Paul Ciolino, who hired an actor to pose as a supposed eyewitness to the murders.

"This investigation by David Protess and his team involved a series of alarming tactics that were not only coercive and absolutely unacceptable by law enforcement standards, they were potentially in violation of Mr. Simon's constitutionally-protected rights," Alvarez said.

"It is my opinion that the killer is Anthony Porter," said Terry Ekl, Simon's attorney.

The image of Porter being released from custody 15 years ago became a symbol of the state's flawed capital punishment system and was a key moment in former Gov. George Ryan's later decision to reduce the sentences of everyone on death row to life sentences.

Porter has strongly proclaimed his innocence. Double jeopardy means he could not be criminally pursued for the murder of two teens 32 years ago.

"I can't definitely tell you if it was Porter or Simon," Alvarez said. "I'm just saying that based on the totality of the circumstances and the way I think Simon was coerced, in the interest of justice, this is the right thing to do."

Ciolino, in a written statement, says Simon didn't just confess to him, he confessed to others, confessed in court, so, "explain that."

ABC 7 was unable to reach Protess, who has earlier said were it not for the work of his journalism students, Porter would have faced execution.

Simon, who is now 62, will sleep in a hotel bed in Chicago Thursday night. Friday he will meet with his lawyers to map out the beginnings of his life outside of prison.
Related topics:
chicagomurderhomicide
Copyright © 2020 WLS-TV. All Rights Reserved.
RELATED 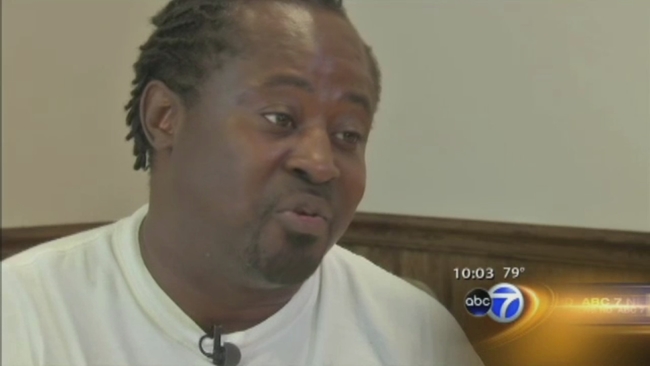