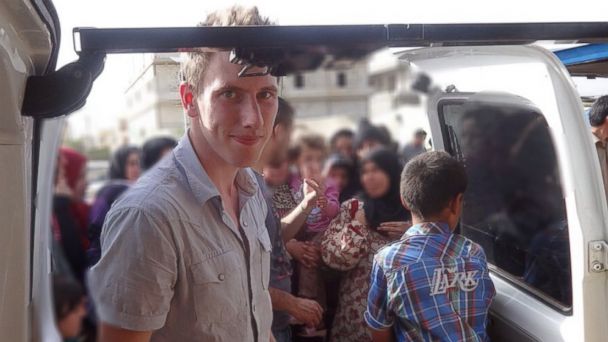 In a desperate move, the mother of the latest American hostage threatened by the terror group ISIS has taken to social media to try and contact ISIS's shadowy leader, and says she and her husband are getting "no help" from the U.S. government.

"I am trying to get in touch with the Islamic State about my son's fate," read an image tweeted by Paula Kassig late Wednesday through a new account, tagging apparently pro-ISIS Twitter accounts. The tweets said the message was a "letter from Abdul Rahman Kassig's mother to IS [ISIS] Caliph [Abu Bakr] al-Baghdadi."

"I am an old woman, and Abdul Rahman is my only child. My husband and I are on our own, with no help from the government. We would like to talk to you. How can we reach you?" Paula Kassig said.

Kassig was first seen in an ISIS video last week in which another captive, British aid working Alan Henning, was apparently beheaded by a black clad ISIS militant. Henning was the fourth Western hostage to be killed in such a brutal, public manner, after American journalists James Foley and Steven Sotloff, and British aid worker David Haines.

In each execution video the next victim is shown, and so far, in each case ISIS has followed through on its threats, despite heart wrenching pleas from the hostages' loved ones.

While the Paula Kassig's tweets have been retweeted dozens of times, at least one of the Twitter users to whom she directed her message angrily derided the effort.

"You trying to ask me for help makes no sense," the user tweeted. "Had I had the chance I would have already killed him!"

"While we are not going to discuss the details of our discussions withe the [hostages'] families, we have reached out to the Kassig family and it remains true that we are using all of our military, intelligence, law enforcement, and diplomatic capabilities to bring Peter home. Those efforts continue every day."

Paula Kassig is also not the first relative of a hostage to criticize the U.S. government over its handling of the ISIS hostage crisis. Last month, after the murder of her son, Diane Foley told ABC News her family was repeatedly threatened by U.S. officials over the idea of raising money to pay James' astronomical ransom.

"I was surprised there was so little compassion," Foley told ABC News in September of the three separate warnings she said U.S. officials gave the family about the illegality of paying ransom to ISIS. "It just made me realize that these people talking to us had no idea what it was like to be the family of someone abducted... I'm sure [the U.S. official] didn't mean it the way he said it, but we were between a rock and a hard place. We were told we could do nothing... meanwhile our son was being beaten and tortured every day."

U.S. government policy is not to negotiate with terrorists for U.S. citizens, but the government does have a large, inter-departmental team assembled to handle hostage cases in Syria, including officials who are tasked with keeping the hostages' families informed of efforts. The process can be had been ham-handed at times, as was the case with the Foleys, according to a former U.S. official familiar with that situation.

'Our Hearts Ache For You'

Kassig is a former Army Ranger who served in the mid-2000s, according to military records, before being medically discharged in 2007. Kassig later became an emergency medical technician and volunteered as a medical assistant in border hospitals in Lebanon in 2012, treating Palestinian refugees and those fleeing from the Syrian conflict. Later, Kassig formed an NGO and began delivering food and medical supplies to the growing [refugee] camps on both sides of the Turkish-Syrian border. He was abducted in Syria in October 2013.

Prior to the Twitter blasts, Kassig's parents released a video message to their son.

"Know that we love you, and our hearts ache for you to be granted your freedom so we can hug you again and then set you free to continue the life you have chosen, the life of service to those in greatest need," Paula Kassig said to the camera. "We implore those who are holding you to show mercy and use their power to let you go."