WLS
By Sarah Schulte
CHICAGO (WLS) -- Chicago police, community leaders and Mayor Rahm Emanuel are calling attention to the threat of gun violence over the holiday weekend in an effort to keep people safe.

Anti-violence events are planned on all sides of the city ahead of what could be a violent holiday weekend. Mayor Emanuel is expected to attend one of these events in the Back of the Yards neighborhood on Friday evening.

With barbecues and bouncy houses, it looks like a typical neighborhood block party. But this event has a purpose- and it's just one of several city anti-violence events called "Put the Guns Down."

At the event in Davis Square Park, an anti-violence mural was painted by seven mothers who do not want their children to become statistics over the Memorial Day weekend. Community groups hope this third annual citywide violence prevention initiative will make a difference this holiday weekend.

"These events allow us a change in narrative in the community. If you look around, you don't see one what is always on the news. What you see is are a bunch of young kids, you hear their voices. We need to change the narrative. You can't celebrate just the negatives of things," said David Gonzalez, a community organizer.

Those who plan to participate include customers who were at Powell's Barber Shop Thursday afternoon when a gunman walked in and opened fire, killing a man. One mother, who did not want her face on camera, was there with her 5-year-old son.

"It was terrifying. And then for me to have to shield my son and crawl on a bench just to get away from this man. And pray at the same time, and look at this man who lost his life, dead in his eyes," she said.

Brenda Mitchell has been living with the effects of violence for 11 years. She is now raising her grandson, Tyler, after his father Kenneth Mitchell was shot and killed by a stray bullet in 2005. Even with the of passage time, they don't see the problem getting any better.

If this year is anything like last Memorial Day, the city is bracing for a violent weekend. Father Michael Pfleger says it's time for Chicago residents to do their part.

In addition, Chicago police say it's also important for their officers to be part of the Put the Guns Down events all over the city.

"It's a good way with us for interact and to continue to build trust between the community and the police," said Cmdr. Daniel Godse, Chicago Police Dept. "The vast majority of our citizens are good, hard-working people who support the police, and this is a good opportunity to show them we're behind them, too.

Besides police and the mayor, many families of gun violence victims are also attending the event. 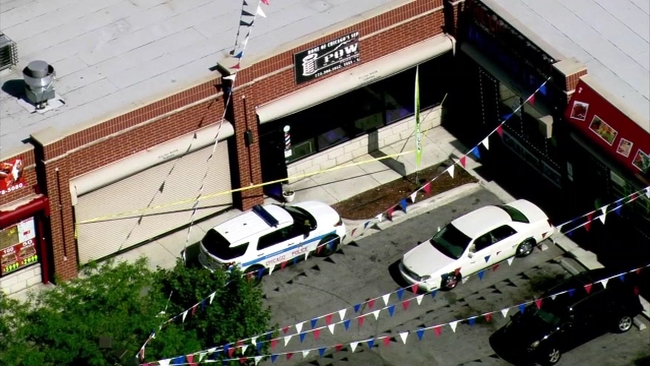