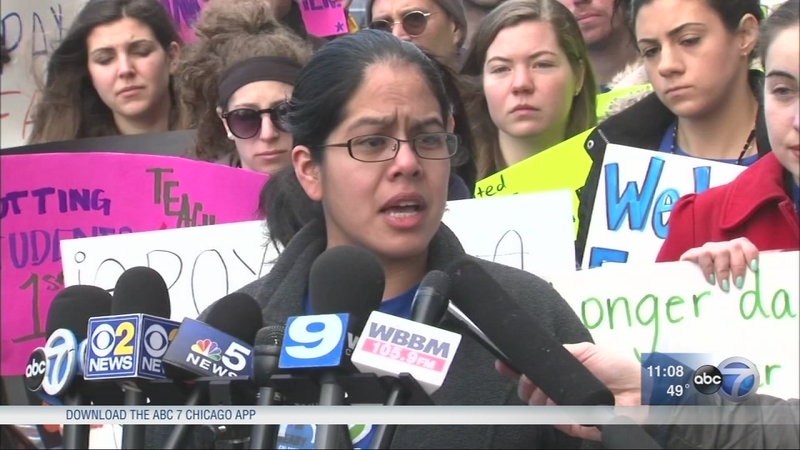 CHICAGO (WLS) -- ASPIRA Charter Schools and the teachers union reached a tentative agreement Thursday night that is expected to prevent a strike.

"But it's no secret that in the state of Illinois, there's a school funding problem. That school funding problem manifests itself with the deficits that Chicago Public Schools have. As a result of that, that gets passed on to us as a manager of a network of schools. So the question is, given the limited resources that we have, do we allocate those resources to classroom instruction, to the support of students, to the support of schools, and do some deferred maintenance? For us, it's clear. Our focus are the students," said Fernando Grillo, ASPIRA chairman.
Related topics:
chicagologan squarealbany parkunion contractteacherstrikecharter school
Copyright © 2021 WLS-TV. All Rights Reserved.
RELATED
ASPIRA charter school teachers vote to strike
TOP STORIES
CPD elective time 'restricted' for foreseeable future: internal memo
Heaviest pumpkin in US disqualified for crack
When will mask mandate end? Chicago's top doctor weighs in
Loop store finally takes boards down more than a year after unrest
4 hurt after Amtrak train collides with semi car hauler: VIDEO
Jelani Day's mother pleads for federal help in investigation
Vigil held for Chicago teen killed in East Garfield Park shooting
Show More
Strike dodged with deal between film and TV crews, studios
Chicago Weather: Bright sunshine, slightly milder Sunday
Man fatally shot leaving gas station in Roseland
Mom delivers 14 lb. baby after suffering 19 miscarriages
State trooper hit by DUI driver on I-90, police say
More TOP STORIES News