Death Toll in Ecuador Rises to 272 After Earthquake 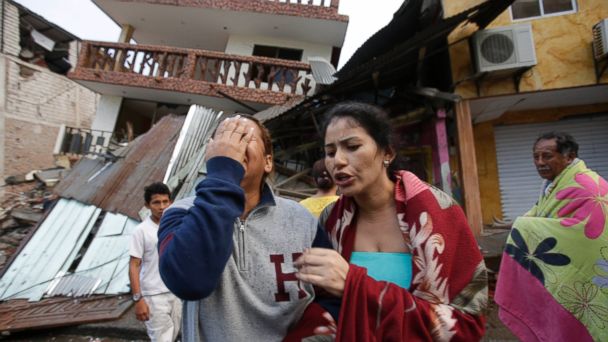 The death toll in Ecuador has risen to 272 with more than 2,000 injured after Saturday's earthquake, president Rafael Correa confirmed Sunday evening. The number of dead is expected to rise "considerably" as crews continue removing bodies from the rubble, Correa said.

Correa characterized the quake as Ecuador's biggest tragedy in 67 years. He cited experts in saying that the damages following the quake were small compared to what could have happened.

There have been no reports of American citizens among the dead, U.S. State Department spokesman Nicole Thompson said today, adding that the department is still working to confirm reports of injured U.S. citizens.

Rescuers were working to reach the sparsely populated area of fishing ports and tourist beaches where the magnitude-7.8 quake was centered. The Red Cross Ecuador said more than 1,200 volunteers were already working in rescue, evacuation and first aid operations and Ecuador's Risk Management agency said 10,000 armed forces personnel were deployed to help people in the coastal areas.

Ecuador's National Police tweeted tonight that they had rescued a mother and daughter, identified as María Sigilema, 37, and Evelin Bone, 7, from the rubble in Pedernales.

Gabriel Alcivar, mayor of Pedernales, a town of 40,000 near the quake's epicenter, pleaded for officials to send earth-moving machines and emergency rescue workers as dozens of buildings in the town were flattened, trapping residents among the rubble.

"We're trying to do the most we can but there's almost nothing we can do," Alcivar told The Associated Press. "This wasn't just a house that collapsed, it was an entire town."

Ecuador's Risk Management agency said 3,500 national police and 500 firefighters had been sent to several towns. Five shelters had been set up for those evacuated from their homes.

Ecuadorian Vice President Jorge Glas called the seismic event "the strongest quake we have faced in decades," adding it was the strongest quake registered in the country since 1979. The nation's armed forces and police were mobilized to keep public order, he said.

At a news conference Sunday, Glas said mobile operators opened free SMS use in the afflicted provinces of Manabi and Esmeraldas.

According to Glas, there were 55 aftershocks between magnitude 2.6 and 6.0, and because of the "shallowness" of the quake, more aftershocks were expected, similar to what was happening in Japan.

There was also a precursor quake of magnitude-4.8 11 minutes before the 7.8 earthquake.