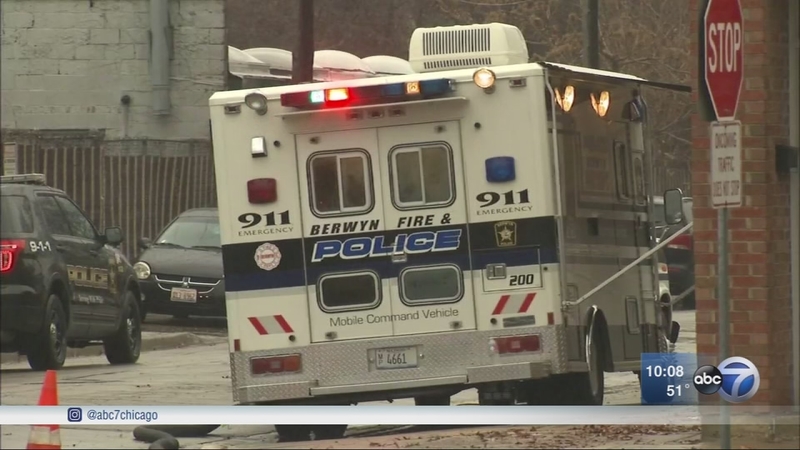 According to a press release from the City of Berwyn, the victim was working on electrical panels in the 6300-block of Park Avenue around 11 a.m. when a male approached and demanded his wallet. When the worker tossed his wallet and attempted to flee, the suspect shot him the back.

"It could have been me, pulling out of the garage. He probably could have came up, so yeah, it's shocking. It's very shocking," said Antonio Alvarez, Berwyn resident.

The AT&T worker was rushed to Loyola Medical Center in Maywood, where he is undergoing emergency medical treatment. A source told ABC 7 Eyewitness News the victim is in serious-to-critical condition, and doctors have managed to stabilize him.

"It's pretty sad that in this world, that you do exactly what you're told and they still shoot you, which there was no reason. He got exactly what he wanted," said Carlo Giannotta, resident.

A spokesperson for AT&T issued the following statement: "Our thoughts are with our employee, and we are cooperating with police in their investigation."

Officials said the suspect also shot at a second person inside a work vehicle. The vehicle was hit by a bullet, but that person was not injured.

Authorities described the suspect as a male in his late teens or early 20s who was wearing a grey hooded sweatshirt, blue jeans, and was armed with a black handgun. He was last seen fleeing on foot through the alley between the 3100-blocks of Cuyler and Highland, then turning east on 32nd Street.

Freedom Middle School was placed on a lockdown during the initial stages of the investigation, officials said. Later Monday evening, colleagues of the injured worker came to finish the work he couldn't complete.

"Berwyn is a great place to live. I'm praying this is an isolated incident. It's the only one I've had in my almost-21 years of living in this house," Giannotta said.