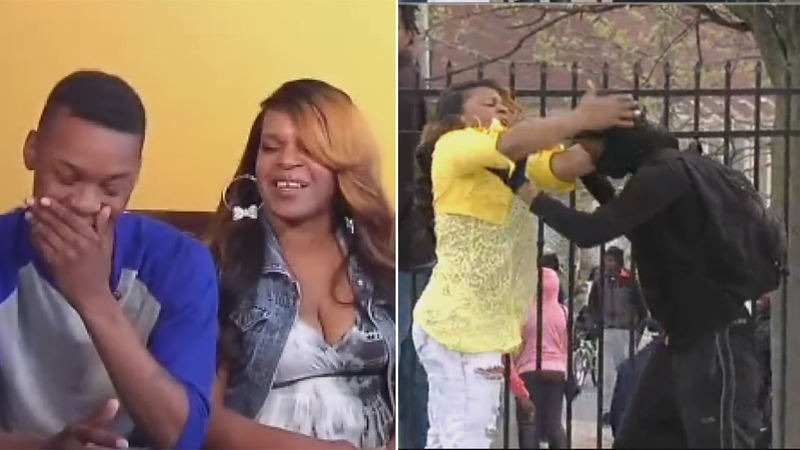 Son of Baltimore's 'Mom of the Year' says he regrets rioting

When 16-year-old Michael Singleton of Baltimore left school Monday after Freddie Gray's funeral, he had a choice: Riot in the streets with his friends, or go home like his mom said.

He choice -- rioting -- landed him in a whole lot of trouble, and his mom, Toya Graham, came to tell him off and bring him home. That lecture was caught on video and has gone viral.

VIDEO: Angry mom beats son suspected of rioting in Baltimore on live TV
A suspected rioter in Baltimore got the smackdown of his life Monday by his mom on live television.

As the video of Graham berating Michael was shared online, Graham -- a single mother of six -- was hailed as the "Mother of the Year." Michael now says he understands that his mother was right and throwing rocks at police was wrong.

"I understand how much my mother really cares about me," he told World News Tonight, "so I'm just gonna try and do better."

Michael said he was embarrassed when his mom showed up but not that surprised.

"Everybody knows my mama," he explained. "All my friends know my mama."

Graham said that when she started smacking her son, his friends wanted to know if he was OK. She had other concerns, though.

Michael was among the estimated 75-100 school-aged children who participated in the riots in Baltimore. Dozens of teens were arrested, ABC News reports. The riots came after peaceful protests on the day of the funeral of Freddie Gray, who died in police custody earlier this month. Gray's death is still being investigated.

As for Graham, she said she hopes she's instilled in her son that violence is never the answer.

"As long as I have breath in my body, you will not be on the streets selling drugs," she said. "You're just not gonna live like that. Not with me."
Related topics:
motherhoodbaltimore riotsparentingviral videoteenagerfreddie gray
Copyright © 2021 WLS-TV. All Rights Reserved.
RELATED