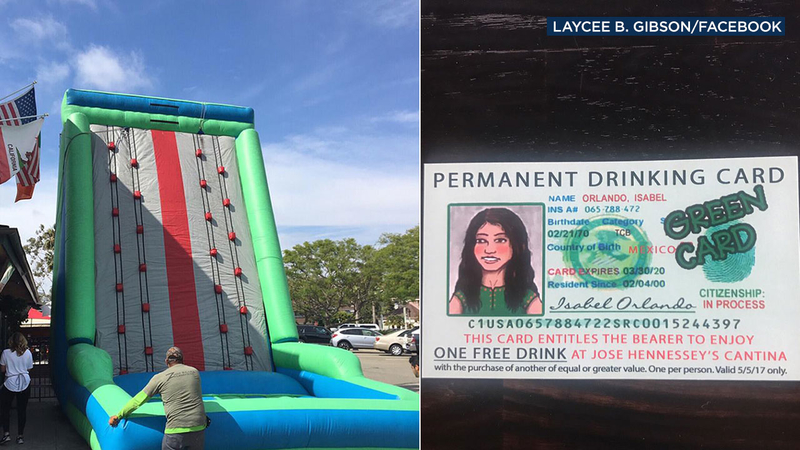 Hennessey's Tavern in Dana Point offered a promotion in which bar patrons could climb up an inflatable wall and then receive a "Green Card" granting the bearer a free drink. The bar's owner said it was intended to spark dialogue and was meant as criticism of President Donald Trump's proposed border wall.

But hundreds of patrons and online commenters took offense at the promotion, taking to Facebook and Yelp to call it racist and a bad idea.

"This was not creating a dialogue. This was promoting casual racism," wrote one commenter on Facebook.

"I will never go here again after seeing their Cinco de Mayo celebration which was a disgusting display of insensitivity and blatant racism," wrote another person on Yelp.

Bar owner Paul Hennessey said that was not his intent all.

"Our intentions were to create a dialogue and show how ridiculous that it is to spend tens of millions of dollars to build a wall and even infer that Mexico foot some or the entire bill and have their citizens build it," Hennessey wrote on Facebook.

"This event obviously struck a chord with many of you out there and you and a number of you did not understand our intent. I encourage all of you to take the time that you have spent posting on social media to spend an equal or greater amount of time writing your congressman or the President himself to express your concerns just as I have."

The statement did not appear to allay concerns, as many called it insufficient and said they would not patronize the restaurant again.
Related topics:
californiacinco de mayopromotionsborder wallu.s. & worldpresident donald trumpimmigration
Copyright © 2021 KABC-TV. All Rights Reserved.
More Videos
From CNN Newsource affiliates
TOP STORIES