Bicyclist crushed to death by cargo container that fell off truck 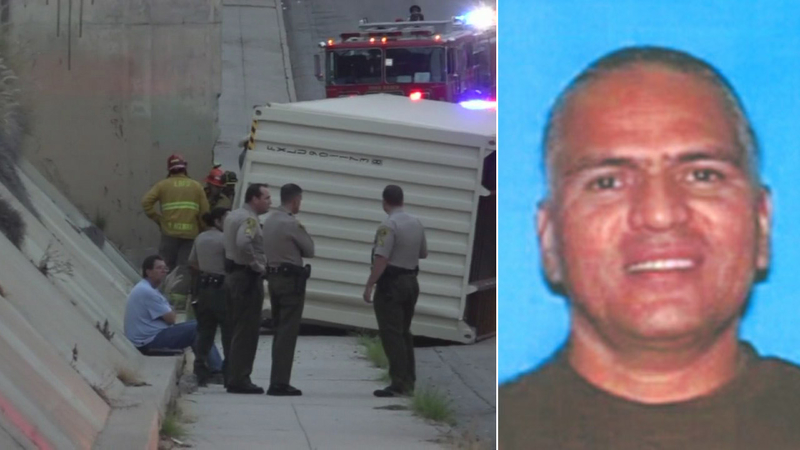 LONG BEACH, Calif. -- A man crushed to death by a cargo container that slid off a flatbed truck in Long Beach on Tuesday has been identified.

The victim was identified Wednesday as Robert Castorena, 51, of Long Beach, according to the Los Angeles County Department of Medical Examiner-Coroner.

Castorena was riding his bicycle on Santa Fe Avenue and Warnock Way at about 5:05 p.m. when the container struck a bridge, fell off the trailer and landed on him , according to the Los Angeles County Sheriff's Department's Carson Station.

Some residents in the area said it is common to see big rigs scrape the bottom of that same bridge.

The Western Pride Inc. truck was based out of Cedar City, Utah, and was reached for comment. The company did not immediately respond.

Alva captured the scene the day before Castorena's death, when another cargo container fell off a flatbed truck, but no one was hurt.

On Tuesday, it turned deadly. It happened just as the driver was passing the man on his bike. The victim never had a chance, witnesses said.

Alva says he believes trucking companies are cutting corners because truck drivers who haul the cargo are on strike at the ports of Los Angeles and Long Beach.

"Right now, since we're on strike, the 18-wheelers aren't taking out the containers. I'm assuming that they're hiring those flatbeds because yesterday it was a flatbed too," said Alva. "Those containers weigh from 40,000 and up. They just strap them on with straps, and they basically tear off."

"What we've got happening here is drivers who are paid by the load instead of by the hour, and so they're just having to drive faster and faster and cut corners, and we've seen so many accidents; people losing their lives," said Barbara Maynard with Teamsters.

As investigators talked with the driver and tried to figure out what went wrong, the Teamsters demanded the transportation companies take action before more lives are lost.

"Really it should be the responsibility of these large trucking companies who contract directly with Amazon, Proctor & Gamble, Toyota, Walmart, the owners of this cargo, who really should be following the law and making sure that everybody is safe because these trucks are lethal," said Maynard.
Related topics:
californiau.s. & worldaccidentfreak accident
Copyright © 2021 KABC-TV. All Rights Reserved.
TOP STORIES
'Simeon curse': JV football player killed in South Side shooting
Search resumes for Brian Laundrie in Gabby Petito case
ISU grad student missing for nearly a month
Naperville North HS cancels school day due to threat
IL reports 3,561 COVID cases, 39 deaths
Gabby Petito saga shines spotlight on other missing persons cases
'They are scared:' Therapist offers free sessions to kids
Show More
TIMELINE: What happened to Gabby Petito?
Why isn't there an arrest warrant for Laundrie? Legal analyst explains
Justin Fields to make first start at QB for Bears against Browns
Waves up to 18 feet possible in Lake Michigan Wednesday
Guinness to open brewery, taproom in West Loop
More TOP STORIES News