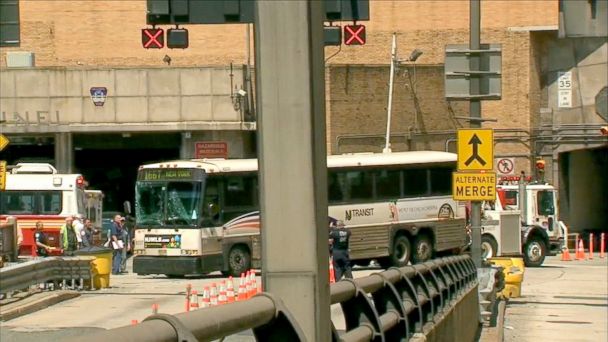 ABCNews
By AARON KATERSKY
A bus rear-ended another this morning in New York City's Lincoln Tunnel -- causing bumper-to-bumper traffic and sending one pregnant woman stuck inside into labor, authorities said.

The 32-year-old woman, whose vehicle was not involved in the 9:30 a.m. accident, was being tended to by police and firefighters. She was eventually taken to a local hospital. There were no other updates on her condition.

Earlier today, an inbound New Jersey Transit and private bus crashed into each other in the center tube close to the Manhattan side of the tunnel. At least 35 people were hurt in the accident, mostly with back and neck injuries.

One of the buses involved in the crash was chartered by Bedford Park Public School in Toronto for a graduation trip.

As a result, the tunnel's center tube was temporarily closed. The tunnel links New York City to New Jersey.