UNIVERSITY PARK, Ill. (WLS) -- No one was inside a south suburban daycare when a car slammed into it on Sunday night.

The driver was taken to a hospital with severe burns, according to the driver's friend. Officials have not released his condition.

The car went through a window and into the infants' room at The Playhouse, Inc., located in the 2500-block of Federal Signal Drive in University Park, around 7 p.m., the owner said. Part of the roof came crashing down. The daycare was closed at the crash and will remain that way until the damage can be cleaned up.

"I know that there's no windows left. I know it's taken out part of the ceiling and part of the outside roof. There's insulation and ducts from the ceiling hanging down. The cribs are not damaged at all. But there's glass all the way from the widow all the way out to the hallway," owner Michelle Bankston said.

Bankston said officials told her drag racing may have led to the crash. Authorities are still investigating. 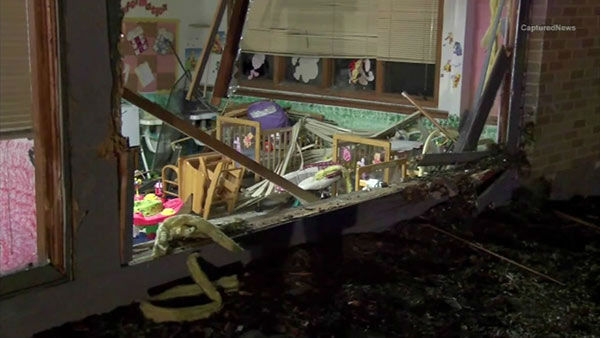