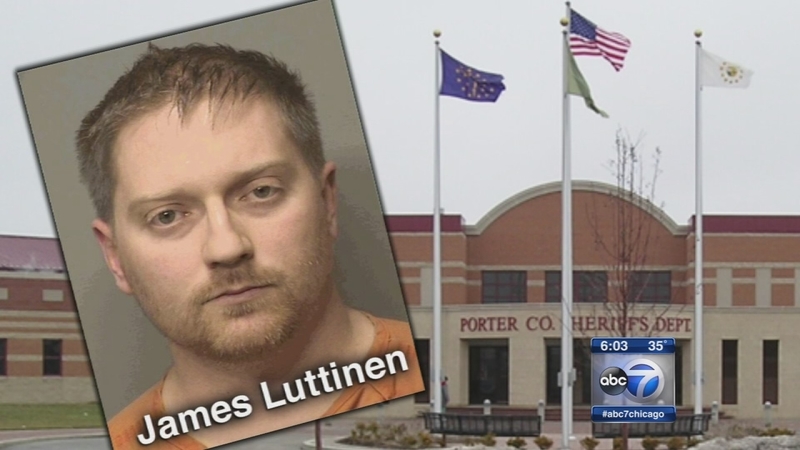 CHICAGO (WLS) -- The ABC7 I-Team has learned that a Porter County, Indiana, man charged with rape was an employee of the Chicago FBI office.

James "Jimmy" Luttinen, 33, was working for the FBI in Chicago when authorities say he raped a teenage babysitter in his Indiana home last July while drunk with his wife and sons in the next room.

Even after court records show he admitted to the crime in July, he continued working at the FBI field office for months until an arrest warrant was issued for him two weeks ago and he was arrested last Friday.

Luttinen was a computer systems specialist with the FBI. He had worked at the bureau's Chicago headquarters since 2009 and had a high security clearance, according to co-workers.

Luttinen is locked up at the Porter County Jail, where he is being held on $100,000 bail.

According to court records, he is charged with raping a teenage relative hired to babysit his young sons.

Authorities say that incident took place in the northwest Indiana home where Luttinen, his wife and children live on July 18, 2015, after the FBI employee returned home drunk from a party. The victim told police Luttinen bought her wine coolers after picking her up for the babysitting job, telling her not to drink until his children had gone to bed.

A police affidavit quotes the teenager as saying when Luttinen got home, he gave her Jell-O shots and she passed out.

Luttinen is quoted as telling police that he was "three sheets to the wind" and that when he got home there was a "young, good-looking girl, rubbing up against him," admitting "I decided to just go with it."

He claims that the teenage babysitter had agreed to their encounter, and that it was only when his wife walked in that he realized there might be a problem.

On January 14, charges were approved and a warrant was issued for Luttinen's arrest - nearly six months after records show he admitted having sex with a minor.

It is unclear how an FBI employee embroiled in such a case could continue working here at the bureau; FBI employees are required to self-report such legal problems.

An FBI spokesman said only: "The employee has been administratively suspended.

Porter County prosecutor Brian Gensel said it is not uncommon for several months to elapse between a defendant's statement and the decision to charge.

It is unclear though whether any Indiana authorities told the FBI in CHICAGO that one of its employees was in trouble, and if not, why not. The Porter County Sheriff's spokesperson did not return our call.