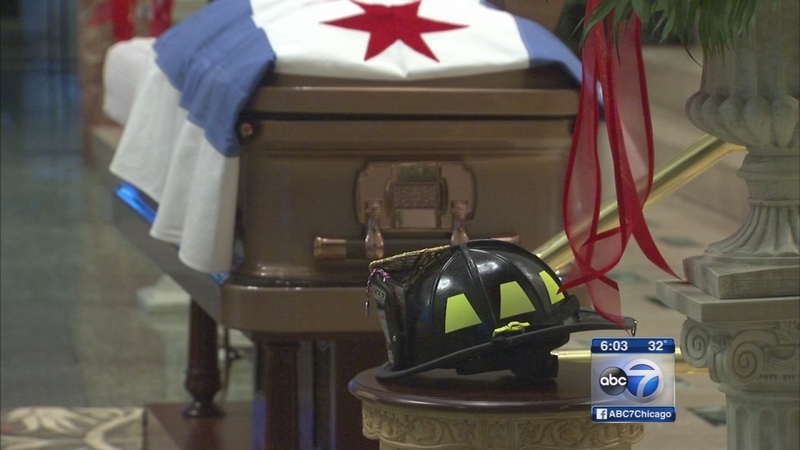 
Capuano's wife, daughter and two sons spent time with him privately before the chapel doors were opened for the service. Mayor Rahm Emanuel and other city leaders joined dozens of firefighters in the school's chapel Friday morning.

The Chicago Fire Department union president presented Capuano's wife with the International Association of Firefighters Commemorative Medal of Honor. The firefighters, who served as Capuano's pallbearers, read letters - through tears - from his wife and children.

"Dad said, 'Someday when I'm gone, you'll be the man of the house and you need to take care of Mom and your brother and sister,'" Capuano's son Nick said in his letter.

His wife wrote about losing the love of her life, and the vacation they were planning to be enjoying together at this very moment.

"We were supposed to be on the beach in Florida together right now," her letter said.

A ceremonial bell was rung three times to signify Capuano's return to quarters after the end of an emergency. Mourners lined up outside the chapel after the service ended to see him off as his casket was hoisted on top of a firetruck. His funeral procession passed by his family's home in Mount Greenwood before ending at Holy Sepulchre Cemetery in Alsip.

"Your dad is not a hero because of the way he died, he's a hero by the way he lived," Santiago said.

The fire commissioner also shared the impact Capuano had on the people he worked with.

"People didn't always know his name, but they knew his smile. If you worked with him for only a few minutes, he would have you laughing by something he said or something he did," Santiago said.

Capuano, 42, died early Monday battling a warehouse fire the city's South Chicago neighborhood after falling through a second-story elevator shaft to the basement of the building.

He worked with Tower Ladder 34 on the South Side and was a 15-year veteran of the Chicago Fire Department. He had recently passed the lieutenant's exam.

"We are so sorry. We have all walked this walk and we are just so sorry, especially for the children. They've lost their dad and there is no getting that back," said Mary Rose McNamee, Gold Badge Society member.

On Thursday night, hundreds of men and women in uniform, along with members of his family and the community, attended Capuano's visitation. He was remembered fondly as a hockey coach and as a volunteer.

Also on Thursday, Capuano's widow filed a wrongful death lawsuit against the company that owns the building where her husband died.

The suit, filed in Cook County Court, claims Anilroshi, LLC, is responsible for numerous safety violations, including the failure to provide protection from falling through holes in the building and failure to obtain building permits to safely decommission an elevator.

City Building Department officials said the removal of the warehouse' elevator was underway without authorization. The city is pushing to get the warehouse torn down.

BMO Harris Bank has established a memorial account to benefit Capuano family. All BMO Harris Bank locations are currently accepting check and cash donations from customers and the general public, with donation funds supporting the family. Checks can be made payable to the Daniel Capuano Memorial Fund.