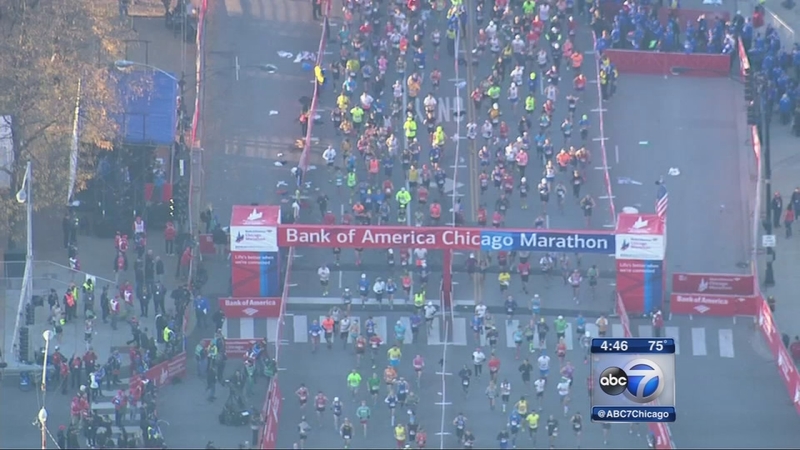 CHICAGO (WLS) -- The Chicago Marathon has become such a big event in Chicago that last year it pumped a quarter billion dollars into the city's economy.

While it brings in first-time runners and veterans, all must be prepared for a forecasted warm and sunny day on Sunday.

The fences go up and the roads are already closed off near the start and finish lines of the 38th running of the Chicago Marathon. No parking signs and a blue line mark the course in 29 Chicago neighborhoods. It is an event that brings in 45,000 runners from all 50 states and 100 countries.

"Twenty-five percent of our participants are first-time marathon runners, so there is a great deal of excitement," said Carey Pinkowski, Bank of America Chicago Marathon.

But these seven men are far from marathon novices; all have run every Chicago Marathon since it started in 1977, and they plan to do it again this year. Now 64-years-old, Wilmette's Henry Kozlowski was 27 and as he says had a full head of hair when he ran the first marathon.

"Initially it was just to do it, then it was to improve the time and lately, it's been not to turn into a couch potato," Kozlowski said.

This year's marathon will also include Joan Benoit Samuelson. The Olympic gold medalist plans to celebrate the 30th anniversary of her American record here, although she says a stomach virus may hold her back of achieving a time within 30 minutes of the 1985 record.

"If I'm well enough to cover the distance I think that will be OK with me because 30 years later, it's a big deal for me," Samuelson said.

Whether you're a veteran or a first-time runner, be prepared to adjust to Sunday's warmer weather conditions. It's not supposed to be as warm as 2007 when many people became sick, although, the marathon's medical staff says runners must listen to their bodies.

"We have increased our event alert system to yellow, the purpose of that is so runners can understand what they might need to do to decrease their pace, change strategy," said Dr. George Chaimpas, Chicago Marathon Medical Director.

Besides the city's emergency responders, the marathon medical staff will have 2,100 volunteers stationed along the route. Security will be a top priority as well, as runners will go through a screening process.

Unless friends and family have a ticket, they are not allowed to greet runners right at the finish line.