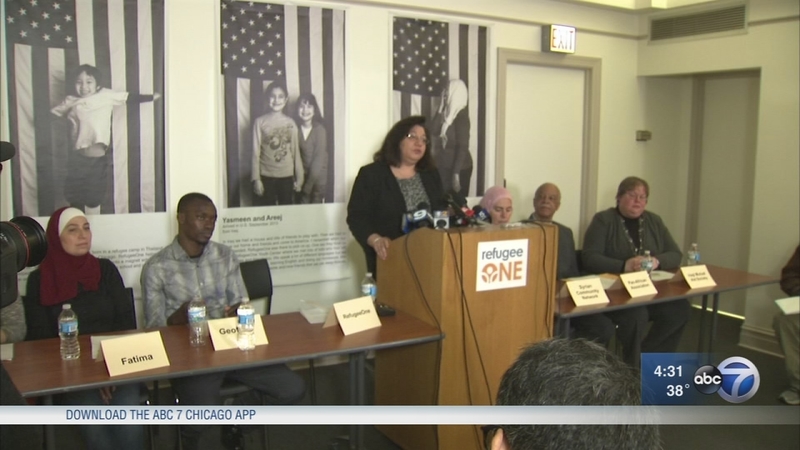 For the first time since the travel ban was announced Friday, Department of Homeland Security officials came out to defend it and its implementation. But that did not stop nearly a dozen faith, immigrant and refugee groups from coming together in Chicago to denounce it.

"We all want to be safe, this is normal. But targeting one group over another and scapegoating this group that has already been through so much, it goes against our values as Americans," said Suzanne Sahloul of the Syrian Community Network.

More than 500 refugees set to relocate in the Chicago area are being affected by the ban, most of them Syrians and Iraqis. Among them, Syrian refugee Khaled Haj Khalaf's daughter, grand-daughter and son-in-law. They were supposed to have arrived in Chicago Monday.

Sponsoring the family was a group of 37 Lincoln Square residents, led by Alisa Wartick. Their furnished apartment, now sits empty. It was just nine days ago they happily showed it off to their relatives already here.
"Introduced themselves and then said, 'Oh, we want to show our sister what her new home is going to look like' so they put her on Facetime, showed her around the apartment and so she saw where she was supposed to live, where she was supposed to come to," Wartick said.

And while U.S Customs and Border officials announced Tuesday the government has granted waivers to 872 refugees set to arrive this week, the waivers don't apply to Syrians.

A handful of refugee families scheduled to arrive in Chicago this week will be granted those waivers, but even those helping them admit, they won't know for sure exactly how many until they're physically allowed to board their planes.

The waivers are only valid through Friday.

Terrorism experts say that Donald Trump's immigration and refugee order makes the country less safe, but his supporters applaud it.

As protests continue over the president's travel ban for refugees and nationals of seven Muslim-majority nations, a University of Chicago terrorism expert says the order will do more harm than good for the country. Trump's supporters, including Republicans in Congress, insist it's a step in the right direction.

"It's a temporary policy, 60 to 90 days. I don't imagine this is what the actual end solution will be, and for a 60 to 90 days period I don't' find it objectionable," said Jeff Halm, president of the Chicago Young Republicans.

The order states that foreign nationals from Syria, Iraq, Iran, Yemen, Libya, Sudan and Somalia will not be allowed to enter the United States for 90 days, refugees from six of the seven countries will be kept out for 120 days, and Syrian refugees fleeing both civil war and ISIS will be kept out indefinitely. Reports on the screening process are due from the Department of Homeland Security after 60 days.

Halm said checking backgrounds of people who come from countries without stable governments is the right thing to do to keep Americans safe. Trump supporter Sherrie Griffith agreed.

"My personal feeling is we really have to take a look at how do we protect the American people," she said.

"The main threat we face is not coming from abroad, it's coming from domestic attackers; lone wolves here in the United States," Pape said.

In addition, Pape said Trump's executive order is likely to inspire those lone wolves who believe the jihadist narrative that the West has declared war on Islam.

"The more that we fit that picture, the more we're helping terrorists recruit people to kill us," he said.

Among the countries included in the ban is Iraq. Pape believes the executive order puts the lives of American soldiers, who are fighting with the Iraqi government against ISIS, at risk. Pape hopes Trump will rescind his order until a better one can be put in place.
Related topics:
chicagolincoln squaredonald trumptravelpresident donald trumprefugees
Copyright © 2021 WLS-TV. All Rights Reserved.
More Videos
From CNN Newsource affiliates
TOP STORIES