Phillips won the historic championship by beating over Althoff Catholic from Belleville, 51-7. Some of those points came from defensive lineman Amir Watts, who scored a touchdown.

"We had alumni saying we couldn't win it but we're living our dreams through you guys," Watts said.

Dreams that were almost realized last year when Phillips made it to the state championship, but lost. This year, they had a perfect season, winning every game.

"To see the looks and the joy and feeling of excitement that they've accomplished something that's never been done before," said Troy McAllister, coach.

Both Coach McAllister and Principal Matthew Sullivan credit the commitment of the team's players. Making the best of challenges that opponents from suburban and parochial schools may not face.

"Our young men have an hour study hall after school. Then get their pads, walk down to mandrake park then practice for two hours walk back get on a bus, maybe two buses, go home and finish homework and come back and do it all again," Principal Sullivan said.

And that focus has also paid off with academics. Phillips ranked poorly across the board when it became a turnaround school in 2010 Now, grades, attendance and graduation rates are up and colleges are taking notice. Watts, a senior, has 25 scholarship offers.

The game was at NIU's campus in DeKalb. Phillips had seven busloads of students, teachers, parents and alumni make the trip.

This game definitely has united the school with the community and is a bragging right for the city. 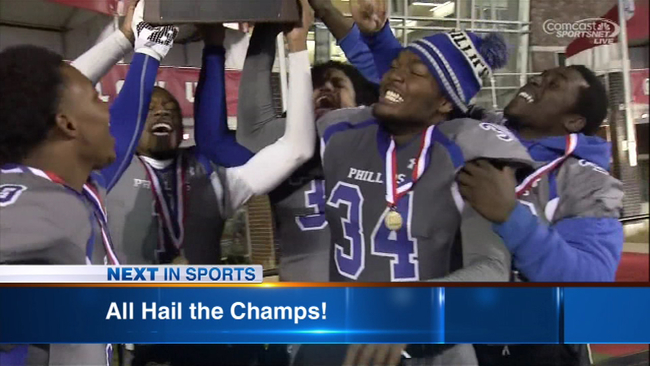