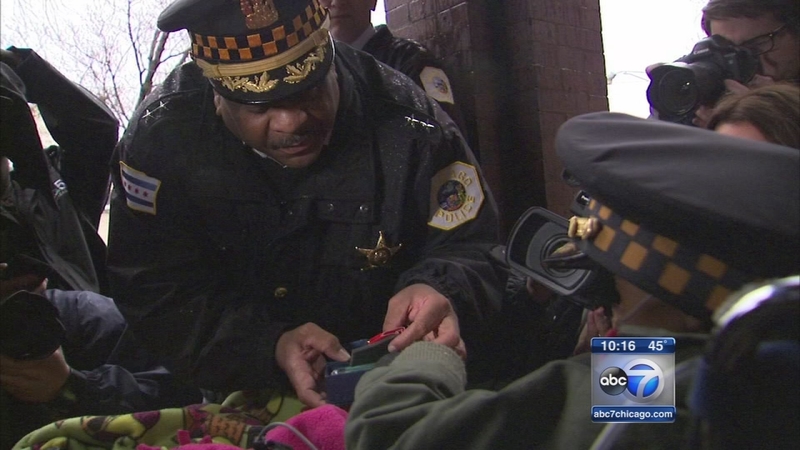 CHICAGO (WLS) -- A young girl whose dying wish is to be a Chicago police officer received a police star, her very own uniform and a medal of valor on Wednesday.

"This is for you, because you're a brave little girl and you are the reason we do what we do. You're our hero," Chicago Police Dept. Interim Supt. Eddie Johnson said.

A 6-year-old girl whose dying wish is to be a Chicago police officer received a police star, her very own uniform and a medal of valor on Wednesday.

Little Madison Pruitt doesn't want to miss a minute of the action. After all, it's not every day the Chicago Police Department holds roll call in front of your house.

Madison is just six years old with terminal cancer. All she wants is to be a police officer for one day.

"A caseworker gave us a call and said, 'Do you mind coming over and speaking to her. Just speaking to her.' She says, 'Yes, she wants to be a Chicago police officer. It's her lifelong dream.' I said, 'Oh no, no, no. We'll do a little something better than that,'" said Sgt. Ernest Spradley.

With her health rapidly deteriorating, police officers decided to take their daily roll call to Madison. Some rode in on horseback, while others carried the cards and balloons. Interim Supt. Johnson presented Madison with a medal of valor donated by a lieutenant who is still on the force.

Before leaving, the officers said a prayer together and hugged Madison's grandmother.

"I'm just so overjoyed for all this love for my baby. You don't know," said Pamlor Nelson, her grandmother.

Madison is currently in hospice care. She was diagnosed with a rare form of muscle cancer that has spread throughout her body.

The family is hoping Madison's story will encourage more people to support research in child cancers.

Her grandmother said this was a day the whole family will remember forever.