In an interview with ABC7, Kennedy wasted no time launching his first attacks against Gov. Bruce Rauner, who is halfway through his first term.

"In the history of our state, we've probably never had a worse governor," said the 53-year-old former chairman of the Merchandise Mart in Chicago. "We've gone two years without a budget and only one person is responsible for that and that's Gov. Rauner."

Kennedy, the eighth child of the late U.S. Sen. and Attorney General Robert Kennedy, said he is running because he believes the state is headed in the wrong direction and that it has "never been in worse shape."


Kennedy, who moved to Chicago in the 1980s, and his wife run Top Box Foods, a hunger-relief nonprofit. He also served as chairman of the University of Illinois Board of Trustees from 2009 through 2015.

He brings to the race instant name recognition and considerable personal wealth to help fund a campaign against Rauner, who recently donated $50 million from his own fortune to his campaign.

Kennedy highlighted his experience running Chicago's Merchandise Mart and the real estate development in downtown Chicago known as Wolf Point, which is backed with more than $1 billion in private financing. Kennedy says he knows "how an economy is meant to function, not just for the rich, but for members of all communities."

Kennedy has never run for public office, unlike his many other family members.

"I was working at the Merchandise Mart, I went into the other family business," Kennedy told the ABC7.

The real estate developer compared his wealth to that of Rauner who chaired a private equity firm.

"I made money by employing people, by paying them. (Rauner's) whole career was about buying things and dismantling them, taking them apart," Kennedy said.

Kennedy said he would spend between $50 million and $100 million of his own fortune to defeat Rauner.

"I'll have all of the resources I need to compete, but I don't think the size of your wallet is what matters to voters. I think its the strength of your vision, the breadth of your ideas and the depth of your commitment," Kennedy told ABC7 on Wednesday.

Chris Kennedy said he would spend between $50 million and $100 million of his own money to beat Gov. Rauner.

Kennedy is the third Democrat to announce that he is seeking to unseat Rauner in 2018. Chicago Ald. Ameya Pawar (47th Ward) and businessman Alex Paterakis have also filed to run.

In a statement, possible gubernatorial candidate J.B. Pritzker, a Democratic billionaire: "As many people know, I'm seriously considering running for Governor. I've listened to people throughout Illinois, and it's clear that our government isn't working effectively for them. Governor Rauner has failed to address the real needs and concerns facing our state. We need a new leader with a record of getting results, who wakes up every day thinking about improving the lives of working families and people all across Illinois."

Businessman/investor Pritzker is the brother of Penny Pritzker, who served as Commerce Secretary under President Barack Obama.
In response to Kennedy's announcement, Pawar said: "It's heartening to see good people get into the race. We currently have a governor who is dividing communities and keeping working people fighting over scraps. I look forward to engaging in a spirited campaign focused on social justice, equity and providing a new deal for all of Illinois."

Rauner has blasted both Pritzker and Kennedy as tied to House Speaker Michael Madigan, the governor's biggest opponent in the Illinois Capitol.

The Illinois Republican Party is tying Chris Kennedy's run for governor to the state's House speaker, who is mired in a state's budget impasse.

Illinois Republican Party spokesman said Madigan has endorsed Kennedy's run for governor "because he knows that Kennedy will never stand up to him." The state GOP already has launched the website MadiganKennedy.com, and added the "last thing Illinois needs is a Madigan lap dog in the governor's office."

"What we need is an individually single-minded reformer like we have in Bruce Rauner and not a Madigan first, Madigan-attached candidate," said Tim Schneider, the chairman of the Illinois Republican Party.

In the ABC7 interview, Kennedy would not blame Madigan for even part of the problem.

"I think there's one person in the big chair and that is Governor Rauner," Kennedy said. 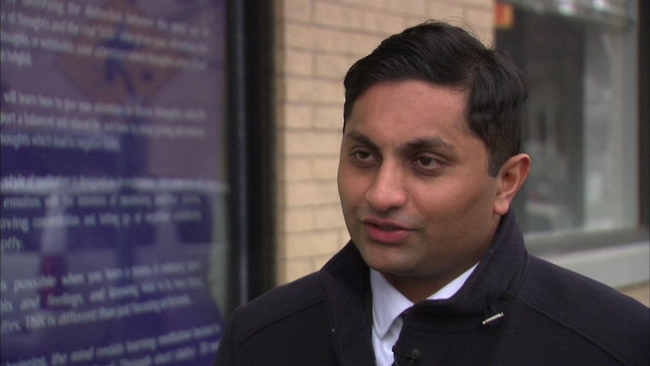