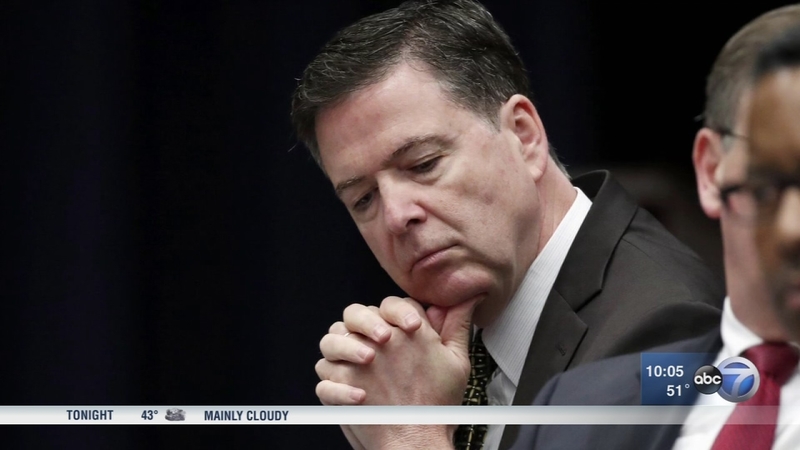 WASHINGTON -- Days before he was fired by Donald Trump, FBI Director James Comey requested more resources to pursue his investigation into Russia's election meddling and the possible involvement of Trump associates, U.S. officials said Wednesday, fueling concerns that Trump was trying to undermine a probe that could threaten his presidency.

It was unclear whether word of the Comey request, put to deputy Attorney General Rod Rosenstein, ever made its way to Trump. But the revelation intensified the pressure on the White House from both political parties to explain the motives behind Comey's stunning ouster.

Trump is the first president since Richard Nixon to fire a law enforcement official overseeing an investigation with ties to the White House. Democrats quickly accused Trump of using Comey's handling of the Hillary Clinton email investigation as a pretext and called for a special prosecutor into the Russia probe. Republican leaders brushed off the idea as unnecessary.

Defending the firing, White House officials said Trump's confidence in Comey had been eroding for months. They suggested Trump was persuaded to take the step by Justice Department officials and a scathing memo, written by Rosenstein, criticizing the director's role in the Clinton investigation.

"Frankly, he'd been considering letting Director Comey go since the day he was elected," White House spokeswoman Sarah Huckabee Sanders said, a sharply different explanation from the day before, when officials put the emphasis on new Justice complaints about Comey.

Also on Wednesday, four people will be interviewed for the position of interim director, including Michael Anderson, special agent in charge of the Chicago field office, according to a Justice Department official. The other candidates include Paul Abbate, FBI executive assistant director and the head of the FBI's cyber and criminal branch; William Evanina, national counterintelligence executive; and Adam Lee, special agent in charge of the Richmond field office.

The Democrats have said some of the worst things about James Comey, including the fact that he should be fired, but now they play so sad!

James Comey will be replaced by someone who will do a far better job, bringing back the spirit and prestige of the FBI.

Comey lost the confidence of almost everyone in Washington, Republican and Democrat alike. When things calm down, they will be thanking me!

The ouster of James Comey drew immediate comparisons to Nixon's decision to fire the independent special prosecutor overseeing the Watergate investigation in 1973.

Trump's daring decision to oust Comey sparked comparisons to Nixon, who fired the special prosecutor running the Watergate investigation that ultimately led to his downfall. Social media lit up with Trump/Nixon comparisons, with almost 4,000 tweets about the Saturday Night Massacre.

"This is Nixonian," Sen. Bob Casey, D-Pa., declared on Twitter. "Outrageous," said Oregon Sen. Ron Wyden, calling for Comey to immediately be summoned to testify to Congress about the status of the Trump-Russia investigation. Rep. Adam Schiff of California, top Democrat on the House intelligence committee, said the White House was "brazenly interfering" in the probe.

"I can tell you there are so many parallels to 1973 and Watergate," said Illinois Senator Dick Durbin.

In 1973, on a Saturday night, President Nixon shocked the nation by firing Archibald Cox, the special prosecutor appointed to investigate Nixon's role in the Watergate scandal.

Trump claims he fired Comey for not doing a good job but, given the fact that Comey has just asked the Justice Department for more money to investigate Russian influence in the 2016 presidential election, some don't buy Trump's reasoning.

"You just fired someone who was leading an investigation into the Trump people. Clearly, whether it was intended to shut down the investigation, it's going to be perceived widely on that basis," said Wayne Steger, DePaul University professor of Political Science.

Steger said the perception of quashing an investigation is the similarity between Trump and Nixon. But the situations are different, he said. Archibald Cox had directly subpoenaed Nixon; Trump says he is not under investigation, though Comey refused to confirm that in sworn testimony before Congress. Besides firing Cox, Nixon also abolished the Special Prosecutor's Office, leading to the resignations of his Attorney General and Deputy Attorney General.

"What Nixon was doing was much more clearly a violation of the rule of law," Steger said.
The Trump/Comey fallout has led many on Capitol Hill, including Senators Duckworth and Durbin, to renew their call for a special prosecutor to investigate any possible Russian election tampering.

And Trump's action left the fate of the Russia probe deeply uncertain.

The investigation has shadowed Trump from the outset of his presidency, though he's denied any ties to Russia or knowledge of campaign coordination with Moscow.

Trump, in a letter to Comey dated Tuesday, contended that the director had told him "three times" that he was not personally under investigation. The White House refused Wednesday to provide any evidence or greater detail. Former FBI agents said such a statement by the director would be all but unthinkable.

Outraged Democrats called for an independent investigation into the Trump campaign's possible ties to Russia's election interference, and were backed by a handful of prominent Republican senators. But Senate Majority Leader Mitch McConnell, with the support of the White House, brushed aside those calls, saying a new investigation would only "impede the current work being done."

Three U.S. officials said Comey recently asked Rosenstein for more manpower to help with the Russia investigation. Sen. Dick Durbin, D-Ill., said that while he couldn't be certain the request triggered Comey's dismissal, he said he believed the FBI "was breathing down the neck of the Trump campaign and their operatives and this was an effort to slow down the investigation."

Trump advisers said the president met with Rosenstein, as well as Attorney General Jeff Sessions, on Monday after learning that they were at the White House for other meetings. One official said Trump asked Rosenstein and Sessions for their views on Comey, then asked the deputy attorney general to synthesize his thoughts in a memo.

The president fired Comey the following day. The White House informed Comey by sending him an email with several documents, including Rosenstein's memo.

It's unclear whether Rosenstein was aware his report would be used to justify the director's ouster.

White House and other U.S. officials insisted on anonymity to disclose private conversations.

The president kept a low profile Wednesday, relying largely on Twitter to defend his actions. In a series of morning tweets, he said both Democrats and Republicans "will be thanking me."

In an awkward twist of timing, the only event on the president's public schedule was a meeting with Russian Foreign Minister Sergey Lavrov in the Oval Office. Among those participating in the meeting were Russian Ambassador to the U.S. Sergey Kislyak, whose contacts with Trump advisers are being scrutinized by the FBI, and Henry Kissinger, who served as Nixon's secretary of state.

Trump's assessment marked a striking shift. As a candidate, he cheered Comey's tough stance on Clinton's use of a personal email and private internet server during her tenure as secretary of state. He also applauded the director's controversial decision to alert Congress of potential new evidence in the case 10 days before the election - an announcement Clinton and other Democrats blame in part for election results that put Trump in the White House.

Sanders attributed Trump's shift to the difference between being a candidate and president. She said Trump became concerned about Comey's efforts to work outside the Justice Department's chain of command during the Clinton investigation, citing congressional testimony from last week that provided more details of his actions last year.

Meanwhile, a farewell letter from Comey that circulated among friends and colleagues said he does not plan to dwell on the decision to fire him or on "the way it was executed."

He said in the letter that though he'll be fine, he will miss the FBI and its mission "deeply." Comey said that "in times of turbulence, the American people should see the FBI as a rock of competence, honesty, and independence."

He also said "it's very hard to leave a group of people who are committed only to doing the right thing."

The letter was posted online by CNN Wednesday night. A person who had seen the note confirmed the online version as authentic to the AP.

Trump is only the second president to fire an FBI director, underscoring the highly unusual nature of his decision. President Bill Clinton dismissed William Sessions amid allegations of ethical lapses in 1993.

The White House said the Justice Department was interviewing candidates to serve as interim FBI director while Trump weighs a permanent replacement. Sanders said the White House would "encourage" the next FBI chief to complete the Russia investigation.

"Nobody wants this to be finished and completed more than us," she said. 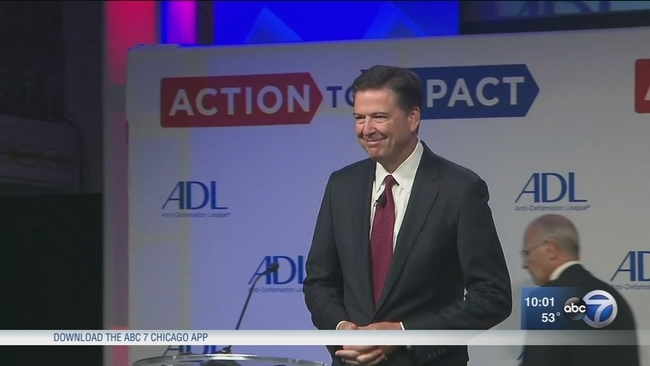