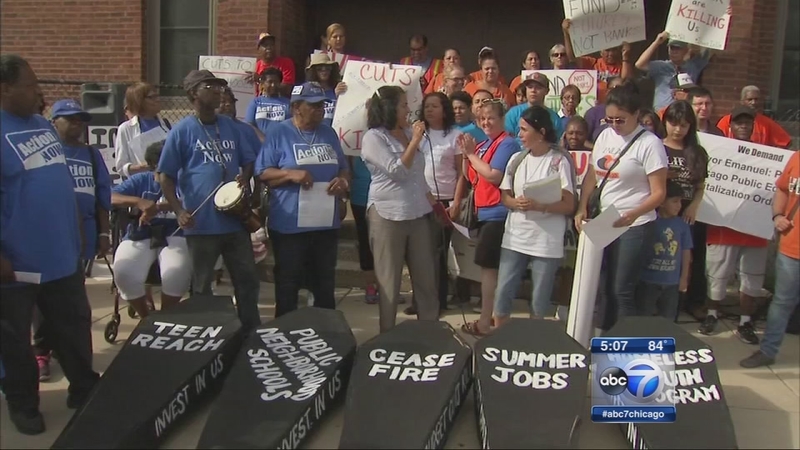 CHICAGO (WLS) -- A staged funeral procession to Mount Sinai Hospital was one of several discussions that took place Tuesday to address the growing problem of gun violence in Chicago.

There is no disagreement. The current level of gun violence in the city of Chicago is unacceptable.

"Kids don't jump rope together anymore. You don't play hopscotch because you're afraid you may be shot by a stray bullet," said Principal Sherryl Moore-Ollie, William Penn Elementary School.

Principal Moore-Ollie was just one of the North Lawndale neighborhood's many community leaders that came together to discuss how to put a stop to the downward spiral being experienced by people here. Housing, job creation, education are all elements needed to curb the violence.

"I've been a part of Mothers Opposed to Violence for years and we're still fighting," said Gloria Muldrow, a crime victim.

Elsewhere in Chicago, similar discussions were being had. Proposing a somewhat unorthodox solution, longtime violence interrupter Tio Hardiman called on the state to resume its funding of Ceasefire, and suggests employing some of the same people currently responsible for perpetrating violent crimes in the city to stop them from happening.

"You need strong individuals that know these young brothers for real that can get into their ear at different times. And you have to hang out with them at times because you have to be there," Hardiman said.

Meanwhile, in Douglas Park, a group of several dozen people came together for a mock funeral procession in Douglas Park. Their purpose? To call on the mayor and governor to better fund violence-wracked neighborhoods.

"Giving these young men help, sending them back to school, opportunities when they get out of jail, set up a work program, so that they can get back in school. It would be a lot better," said Clarise Evans, a certified nurse assistant.
Related topics:
stop the violencegun violencechicago violence
Copyright © 2021 WLS-TV. All Rights Reserved.
More Videos
From CNN Newsource affiliates
TOP STORIES