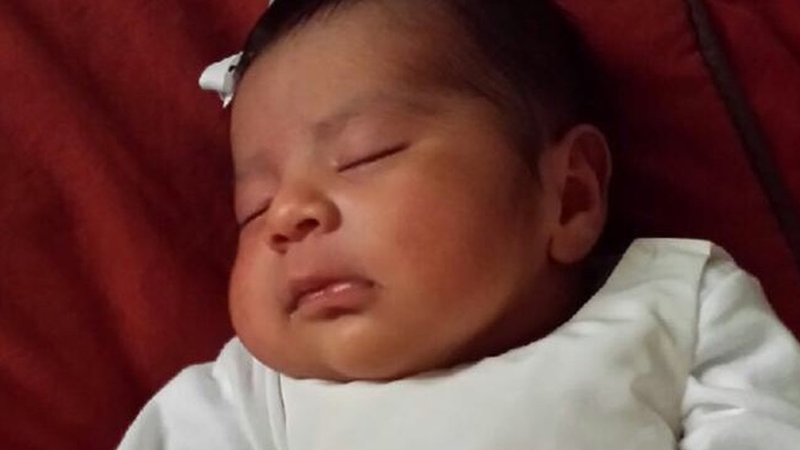 LONG BEACH, Calif. -- The Long Beach, Calif., baby found dead in a dumpster was part of a woman's elaborate plan to kidnap two babies in order to continue a lie to her boyfriend that she had given birth, Long Beach police said.

Four suspects have been arrested in connection to the murder of 3-week-old Eliza Delacruz, Long Beach Police Chief Robert Luna said at a Wednesday news conference.

Giseleangelique Rene D'Milian, 47, of Thousand Oaks, and Anthony McCall, 29, of Oceanside, were arrested on suspicion of murder, kidnapping, attempted murder and conspiracy. Todd Boudreaux, 44, of Fontana, and Charisse Shelton, 30, who is D'Milian's daughter and is a Corona resident, were arrested for accessory after the fact.

On Jan. 3, Delacruz was kidnapped and her parents and uncle were shot in their Long Beach home. The following day, her body was found dead in a dumpster in Imperial Beach.

Police believe the plot to kidnap Delacruz was spurred by D'Milian's lie to her boyfriend that she was pregnant with his twins. She told him she gave birth to his children in December 2014, Luna said.

D'Milian did not give birth to any children, and instead decided to kidnap two babies in order to continue her lie, Luna said.

On the day of the shooting and kidnapping, Delacruz and her mother had taken a bus home, which was followed by a black Range Rover with the D'Milian and McCall inside. At about 4 p.m., D'Milian made contact with Delacruz's mother, who then went home without any suspicions, Luna said.

Less than two hours later, McCall forced his way into the home and shot Delacruz's parents and her uncle, Luna said. The adults were injured, but survived the attack.

About a month later, D'Milian and McCall allegedly plotted to kidnap another baby from an acquaintance in El Segundo.

On Feb. 6, El Segundo police responded to a hotel in the 2000 block of East Mariposa Avenue and found a 23-year-old woman severely beaten with a baseball bat. Her 4-month-old son was still in the hotel room.

McCall had allegedly fled the scene after employees knocked on the door.

Boudreaux and Shelton are suspected of helping cover up the crimes after they occurred.

All four suspects were expected to appear in court on Friday.

"I can't summarize this case any other way then (the) people alleged to have committed these crimes are just evil," Luna said.

An investigation into these incidents was ongoing as authorities looked for additional witnesses.

Long Beach police believes D'Milian told people she ran a charitable organization that wanted to help young mothers and their infants. She may have contacted other friends and acquaintances about their young children.

Anyone who may have been contacted is asked to call Long Beach Police Department Homicide Detail at (562) 570-7244.