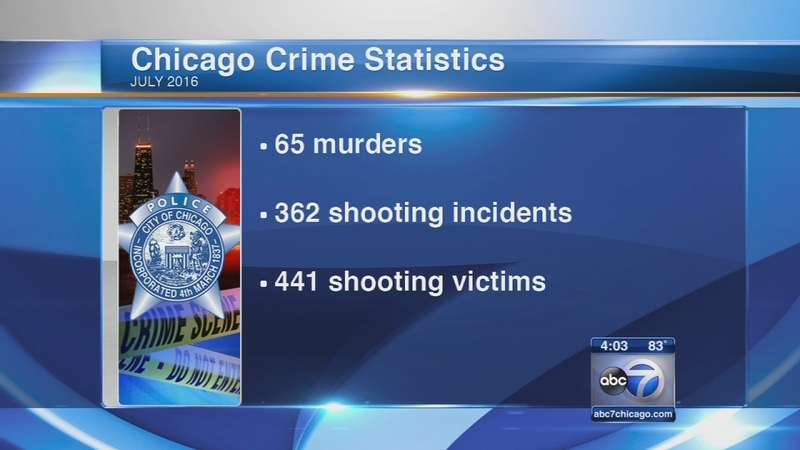 CHICAGO (WLS) -- New crime numbers released by the Chicago Police Department show that while there was a decline in murders this month compared to last, it was the deadliest July in at least five years.

One of the youngest victims is 6-year-old Tacarra Morgan. She was shot in the stomach outside her home on July 19. Miraculously, she survived.

"You can tell something is wrong. She lost weight, she doesn't walk like she used to," said Johnnie Morris, Tacarra's grandmother.

Tacarra's family said police need to take every single gun off the street before they feel safe enough to let her be outside again.
EMBED More News Videos

Crime numbers released by Chicago police Monday show murders in July are down from the previous month.

The Chicago Police Department recovers more guns per capita compared to any other police department in the United States, Johnson said. Police have taken down more than 120 gang members and seized 5,000 guns so far this year.

"Until we hold repeat offenders accountable, we're going to continue to see this violence," Johnson said.

Johnson said most of the violence is coming from two or three police districts and that nearly 85 percent of the shooting victims are on the department's Strategic Subjects List, comprised of people who have had prior contact with law enforcement.

The Fraternal Order of Police is recommending officers not volunteer for overtime during the Labor Day weekend, a historically violent time, due to lack of respect for police. Local church groups are calling for a "peace surge" on the streets of Chicago. Religious leaders say they will take matters into their own hands if they have to come together to monitor 10 high-crime neighborhoods themselves and combat violence.

"In order to restore trust between community and this police department, they have to be held to the same standard as civilians," said Calloway. "If not, we will never see the trust that we are fighting for."

The 18-year-old was shot in the back and killed by police. Three Chicago police officers involved in the shooting have been relieved of their police powers.