WLS
By Laura Podesta
SCHILLER PARK, Ill. (WLS) -- Investigators in west suburban Schiller Park have not yet revealed what led to a shooting that killed a 53-year-old woman and put a man in the hospital - but it may have been road rage.

Schiller Park police are working with the West Suburban Major Crimes Task Force to track down leads in the case, which remains a mystery. No one is in custody.

Police responding to reports of gunfire found the woman shot to death inside a black Honda around 11:50 a.m. Wednesday in the 9500-block of Lawrence Avenue. The sedan had crashed into a tree. There were several bullet holes in the car window and door.

The woman's identity has not yet been released. Flowers were placed near the scene Thursday.

A 19-year-old man was also found shot inside the car. He was transported to a local hospital. No further information on the man's condition was provided.

One witness said he heard about seven shots. Salvatore Calabrese, another witness, said the 19-year-old man ran from the Honda and pounding on a door, pleading for help.

Investigators searched the area and determined there was no immediate threat to the public.

"It's weird around here. It's usually no violence, no crime. Nothing around here," said Philip Slezewski, who lives nearby. 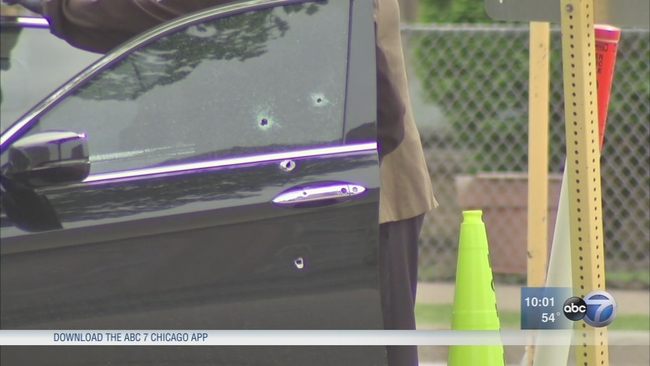