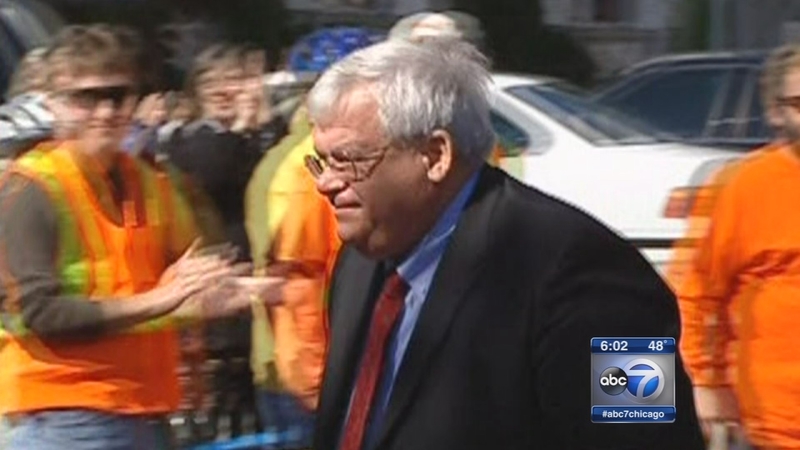 Dennis Hastert to ask for probation at sentencing

CHICAGO (WLS) -- In a mea culpa marked by deep regret but no details, former House Speaker Dennis Hastert plans to throw himself on the mercy of a federal sentencing judge and asked for probation, according to court documents obtained by the I-Team.

His sentencing, which was set for Friday but has been moved to April 27, will be "the most difficult day in Mr. Hastert's life," according to the sentencing memo filed by his attorneys.

"Mr. Hastert's fall from grace has been swift and devastating" the memo states, caused by "unfortunate and harmful incidents he caused decades ago." But the nine page legal memo doesn't provide any detail as to what those harmful incidents were.

However, Hastert's attorneys cite the "humiliation and isolation that Mr. Hastert and his family have already suffered" since he was arrested and charged with financial crimes that are believed to have been related to payoffs in a sexual misconduct matter. His lawyers ask for no jail time because "he will stand before the Court having deteriorated both physically and emotionally, undoubtedly in part due to public shaming and humiliation of an unprecedented degree."

According to Hastert's attorneys, "despite his mistakes in judgment and his transgressions, for which he is profoundly sorry, we implore this Court, in imposing sentence, to consider the entirety of Mr. Hastert's life."

Hastert, 74, portrayed as wracked with guilt, "continues to be consumed by feelings of regret. He is overwhelmed by the guilt he feels for his actions, for the harm he caused by his misconduct, and for disappointing those who have supported him for so long. Since his indictment, Mr. Hastert's work and his reputation have become forever tainted ... Mr. Hastert is tormented by the thought that this disgrace will follow his family."

Judge Thomas Durkin is being asked to also consider Hastert's declining health: Type 2 diabetes since 1988, a foot ulceration caused by diabetes, recurrent fevers, late last year a severe form of sepsis that nearly killed Hastert during his first week in the hospital according to the filing. "While in the hospital, Mr. Hastert also suffered from a small stroke ...Mr. Hastert continues to need assistance with all major activities of daily living except for feeding himself-he needs assistance getting out of bed, toileting, bathing, and dressing himself.