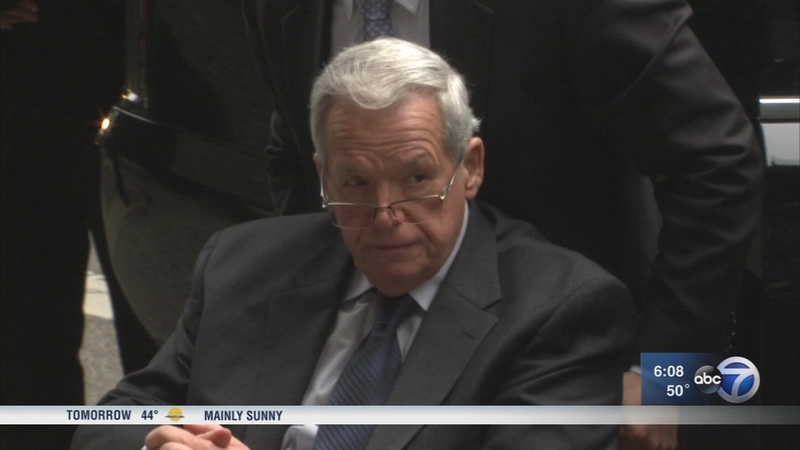 CHICAGO (WLS) -- The attorney for the man who claims to have received hush money for not going public with sex abuse claims against Former House Speaker Dennis Hastert said they do not expect the abuse case to go to trial.

Hastert is likely to settle out of court in the case of the $3.5 million hush money pact that led to his downfall, the attorney said.

When the sickly Hastert was wheeled into a federal prison in Minnesota last summer, it was just one avenue on his ride through the legal system.

In Kendall County Circuit Court, Hastert's attorneys are trying to fend off a civil suit filed by one of his sexual abuse victims.

An attorney for the 75-year-old, who was once the third most powerful man in American government, said he expects Hastert to be out of prison as early as July even though parole officially begins in August.

"But obviously no one in this room has any control over that. So what I suggest is I get my reply on file the parties issue and we come back for a status after parties have opportunity to meet and confer about written discovery," John Ellis, Hastert's attorney, said.

Hastert's victim, known only as James Doe, claimed to have been molested by Hastert 40 years ago during a school wrestling trip.

Hastert paid him $1.7 million in hush money but the victim claims he is still owed another $1.5 million under their agreement.

"Very few cases do go to trial and so I don't expect this one to be any different," Kristi Browne, attorney for Hastert's victim, said.

Hastert said the victim should have to pay him back in full for breach of contract. But the attorney for the victim said that Hastert has "unclean hands" a legal doctrine aimed at leveling the playing field and should not be allowed to recover on his claim for equitable relief.

The victim's attorney said if the case goes to trial she wants her client protected.