Did something strike Amtrak train before crash?

WPVI
PORT RICHMOND, Pa. -- The National Transportation Safety Board said on Friday that an interview with an assistant conductor indicated something may have hit Amtrak 188 before Tuesday night's wreck that left eight people dead.

Robert Sumwalt of the NTSB described an interview with one of the train's assistant conductors.

The assistant conductor allegedly told investigators that she believed she heard engineer Brandon Bostian talking to a SEPTA engineer.

The SEPTA engineer said something may have hit his train or his train had been shot at, the assistant conductor recalled.

There were reports of a SEPTA train being hit by an object shortly before the Amtrak crash earlier this week, but there was no known connection.

Bostian told the SEPTA engineer he believed something hit his train as well, the assistant conductor said, according to the NTSB.

She felt a rumbling and then the train tipped over, she told the NTSB.

Sumwalt said the NTSB also interviewed Bostian on Friday. According to Sumwalt, Bostian did not report being struck by anything and, when asked by the NTSB, he did not recall saying the train was.

The NTSB says a forward-facing camera on Amtrak 188 did not immediately indicate anything striking the train.

Sumwalt said, "Our investigation has not independently confirmed this information, but we have seen damage to the left-hand lower portion of the Amtrak windshield, that we have asked the FBI to come in and look at for us."

Sumwalt described Bostian as "very cooperative." He said Bostian remembered ringing a bell as he passed through the North Philadelphia train station, but doesn't remember anything after that.

Bostian had a good working knowledge of the territory, Sumwalt said, and said he was not tired or sick.

On Thursday, the NTSB said that in the last minute or so before the derailment, the Washington-to-New York train sped up from 70 mph until it reached more than 100 mph at a sharp bend where the maximum speed is 50 mph.

Sumwalt said Thursday it was unclear whether the speed was increased manually by engineer Brandon Bostian.

So far, investigators have found no problems with the track, the signals or the locomotive, and the train was running on time, Sumwalt said.

Bostian was in the cab in the front of the high-tech engine. On the left, there is a throttle handle to increase speed. There is also a red alert button the engineer has to hit a few times each minute or the engine goes into emergency shutdown mode.

On the LCD screen in front of him, there is a speedometer which would tell him how fast he's going and, to the right, is the red-handled train break. The NTSB says it's one of the newer models of engines Amtrak is putting into service.

"And this particular locomotive was placed into service just over a year ago," said Sumwalt.

Investigators say there were no signs warning to reduce speed ahead like you may see on roadways. Engineers must rely on memory.

"There is no sign alongside the track. That is part of the engineer's qualifications that they're supposed to know," said Sumwalt.

The new information comes on the same day that the first funeral for the victims was held.

Services for Justin Zemser, a 20-year-old midshipman at the U.S. Naval Academy, took place on Long Island on Friday morning.

Joseph Boardman, Amtrak president and CEO, said in a letter on Amtrak's official blog Thursday that it is cooperating fully in an investigation into the accident that killed eight people and injured more than 200 this week.

"With truly heavy hearts, we mourn those who died. Their loss leaves holes in the lives of their families and communities," Boardman wrote. "Amtrak takes full responsibility and deeply apologizes for our role in this tragic event."

He said the railroad's goal is "to fully understand what happened and how we can prevent a similar tragedy from occurring in the future."

The last wrecked railcars were removed Friday and were taken on flatbed trucks to an Amtrak installation in Delaware for further examination.

Amtrak now says service on the heavily traveled stretch between New York and Philadelphia is expected to be suspended through Monday while the tracks and other equipment are repaired, the railroad said. Earlier, Amtrak said limited service was scheduled to resume on Monday.

Mayor Michael Nutter said Thursday that all of the passengers have been accounted for.

Separately, the Philadelphia district attorney's office said it is investigating and will decide whether to bring charges.

Bostian's lawyer, Robert Goggin, told ABC News that his client suffered a concussion in the wreck, needed 15 staples in his head and has "absolutely no recollection whatsoever" of the crash. Goggin also said Bostian had not been using his cellphone, drinking or using drugs.

"He remembers coming into the curve. He remembers attempting to reduce speed and thereafter he was knocked out," said Goggin. He said Bostian's cellphone was off and stored in his bag before the accident, as required. Goggin said that his client "cooperated fully" with police and told them "everything that he knew," immediately consenting to a blood test and surrendering his cellphone.

Bostian's friend Jason Ksepka told Action News, "He was always just a very nice guy. He was always looking to help people and be part of a supportive group and supportive community."

Ksepka went to college at the University of Missouri with Bostian. They have only stayed in touch on Facebook in recent years, but says Bostian was always a compassionate caring guy - and far from reckless.

He says becoming a train engineer was Bostian's dream job.

"It's just a really terrible situation for everyone involved. From the whole city of Philadelphia whose reeling from this, to Brandon himself and his family and of course the unfortunate victims that have lost their lives and been injured."

Information from The Associated Press was used in the writing of this post.
Related topics:
u.s. & worldtrain derailmentamtrak train crash
Copyright © 2021 WPVI-TV. All Rights Reserved.
RELATED 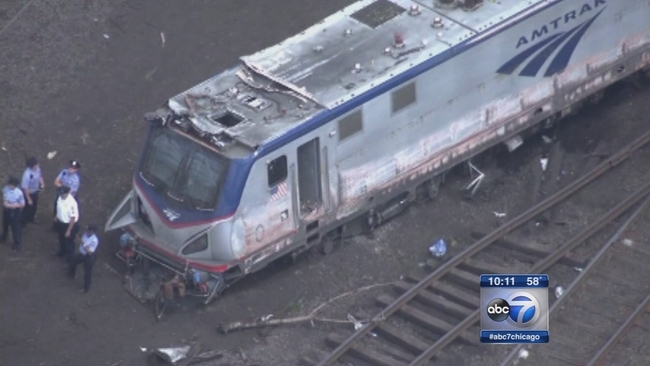