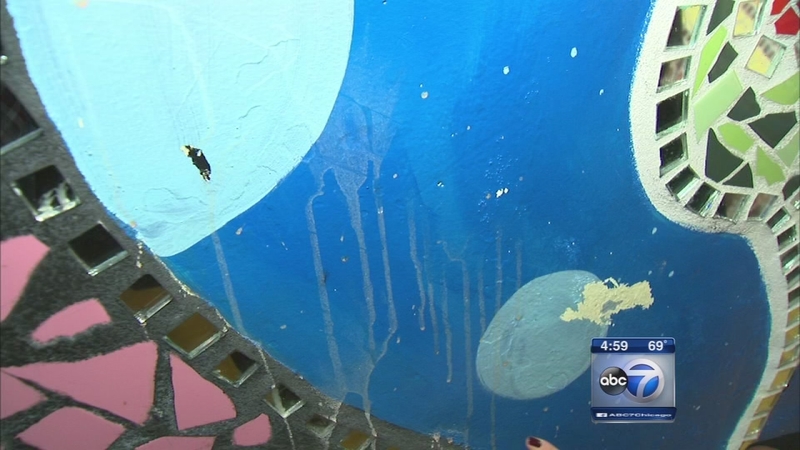 Principal Dave Belanger said the buildup of filth at Hanson Park Elementary School, where 1,400 students are enrolled, is unacceptable.

Part of the problem is the choice of cleaning supplies, Belanger and custodians said. There aren't many old-fashioned mops and buckets at Hanson Park since Aramark won a $260 million contract to cleanup Chicago's public schools. They've been replaced with micro-fiber pads and cleaning solutions.

"This would be a little bit like snow-blowing the Eisenhower with an 18-inch snowblower," Belanger said.

"This milk was spilled on the wall since I got here last year as principal," Chrobak-Prince said.

The Aramark contract was supposed to free principals from overseeing custodial staff. Principals are quick to point out they don't blame the custodians for this mess.

"They won't allow them to use basic soap, water and bleach. It's some chemical product that you spray on that they have some license to purchase from some corporation," Principal Troy Lariviere, Blaine Elementary, said.

"Aramark's job is to clean the schools so our principals and our teachers can focus on their fundamental responsibility: education. They will either live up to that contract and clean up the schools, or they can clean out their desks and get out," said Mayor Rahm Emanuel.

CPS officials said Aramark is sending out 50 additional custodians at the company's expense to help at the schools, while Aramark said it is setting up meetings with principals.

Aramark released a statement: "We have been training all CPS custodial staff on new equipment, using more efficient, environmentally friendly cleaning techniques, and are confident that this new program will deliver the results and savings we promised the CPS administration and the Mayor."