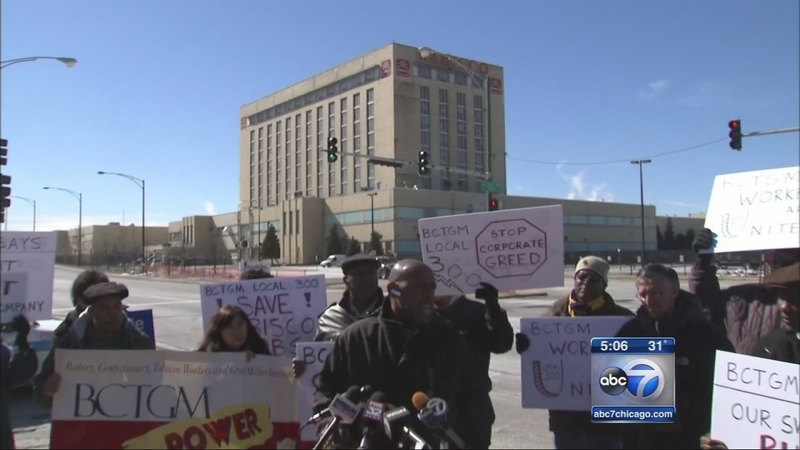 CHICAGO (WLS) -- With the Illinois primary less than two weeks away, a bakery on Chicago's southwest side has become an issue in the race for the White House.

Donald Trump and the Bernie Sanders campaign are speaking out against the plan to send jobs at a Nabisco plant to workers in Mexico. Layoff notices will be handed out soon.

The Nabisco plant has been there since the 1950s.

Michael Smith was proud when he got a job at the Nabisco plant five years ago. He says he always had dreams of working for a great American company, but the dream - for him and hundreds of others - is short lived; 600 employees will lose their jobs and the first wave of layoffs affecting about 277 arrives on March 21.

"I'm above 50 years old, so you've got to imagine job pool is a bit smaller for me," Smith says. "I have a daughter in college, we have to scramble to figure out what we're going to do."

Mondelez International now owns the company that makes the American classic snacks Oreo and Chips Ahoy. Instead of spending $130 million to upgrade the company's largest U.S. bakery, Mondelez is shipping some if its Chicago jobs to its Mexico plant.

"The only incentive we see from them is that it is greed. Pure greed," Smith says.

Smith joined members of his union and Bernie Sanders supporters to call for Mondelez management to reconsider and for new trade policies in the U.S.

"There is no excuse to importing processed food back into the United States," says Larry Cohen, Labor Chairman of the Bernie Sanders Campaign.

The Sanders campaign is not the only presidential campaign to weigh in on the issue.

While he was loose with his facts, Donald Trump mentioned the issue in his Super Tuesday speech.

While Mondelez workers and the Sanders campaign welcome Republican support, Trump is not who they have in mind.

"Donald Trump pits us against each other," Cohen says. "The only way to stop this is to unite people, whether black, brown, native born, immigrant. Trump does not help build that kind of movement."

In several speeches, including Tuesday's, Trump has said the entire plant is closing down and 1,200 jobs are going to be lost. That is untrue; the plant will be open and is cutting about half its jobs. ABC7 reached out to the Hillary Clinton campaign about this issue and have not heard back.