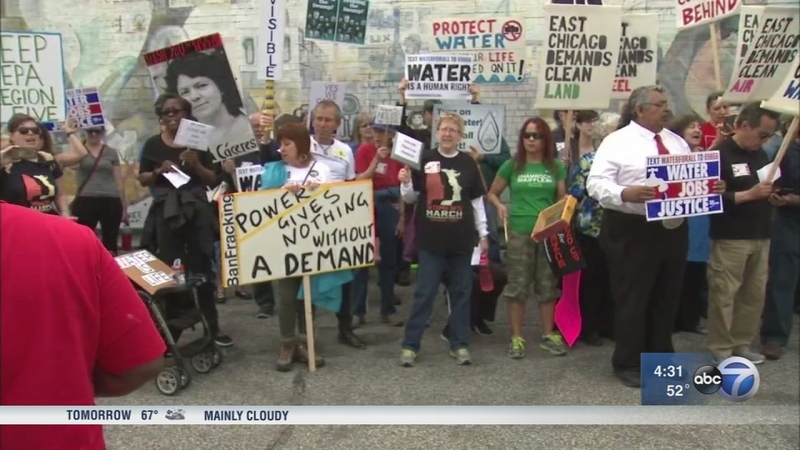 The housing project in question is relatively empty; more than 1,000 families have left since an order to vacate was issued last summer. Wednesday on the EPA Superfund site, the residents who feel they've been cast aside took a stand.

The protesters were waiting for Indiana's governor to join new EPA Administrator Scott Pruitt at his first stop at one of the 1,322 Superfund sites across the country since he took control of the EPA.

"It's the EPA's objective, my objective as administrator of the EPA, to come and make sure people's health is protected here in East Chicago, and they can have confidence their land, their health is going to be secure for the long term," Pruitt said at a press conference.

But the concern in East Chicago and in Chicago is the EPA office won't be open long enough to make sure that cleanup happens.

"We are here because we want the EPA to know, we want Pruitt to know we will not stand for the Region 5 office in Chicago being moved and dislocated," a protest speaker declared.

The Trump administration has proposed a 31 percent cut to the EPA's entire budget, but this afternoon Indiana's governor, local officials and other administrators stood before people and told them they are committed to getting the project cleaned up, and protecting their health and safety.

The impacts of lead contamination in East Chicago have made clear some of the most pressing systemic challenges these families face. The situation demands an unprecedented level of cooperation among state, local and federal stakeholders. That is pretty easy to articulate, but it's difficult to achieve.

Today's visit by EPA Administrator Pruitt is one more example. I think it speaks volumes that he chose East Chicago to be his first Superfund site visit since taking on this new role. From our very first meeting, Pruitt and his team have demonstrated their commitment to being a partner with us, and I am profusely grateful.

This all means the collaboration is working. It means we are here, and we're staying. We're not going to leave until we get the job done, and then we'll be here a little longer-because this is about the residents.