WLS
By Paul Meincke
CHICAGO (WLS) -- It was 100 years ago this week that one of the worst maritime disasters in history happened on the banks of the Chicago River.

Thousands scrambled for safety as the ship named "The Eastland" rolled over.

To sit on the city's new riverwalk between Clark and LaSalle, it's hard to fathom what happened here a century ago.

Tragedy quickly ended what was to be a grand day for employees of Western Electric and their families. Twenty-five hundred of them had just boarded the Eastland for their picnic excursion to Michigan City when the ship began to list, and then roll.

"In a matter of five minutes, the tragedy was pretty much over. Either you survived or you didn't," said Ted Wachholz, Eastland Disaster Historical Society.

Eight hundred forty-four souls did not survive, many caught below deck, crushed by falling furniture and wall to wall humanity, imprisoned in a watery grave that rescuers couldn't reach.

Entire families, like the Sindelars , mom, dad, five kids, gone. The stills of that day are burned into our history, but this year also brought the discovery of film shot at water's edge 100 years ago.

"I thought maybe this was a lost film," said Jeff Nichols.

Nichols was searching a Dutch archival site for his dissertation when he found this lost film, and then another piece on a British site.

The victims were working class people - first and second generation immigrants who had no way of knowing that the Eastland had nearly capsized before. Now, three years after the Titanic, there were more heavy lifeboats on an already top heavy ship with an inefficient ballast system.

McCarthy spent a dozen years researching the Eastland and concludes in his book that the ship's owners knew they needed to alter the Eastland's ballast system, but took a pass.

"They had the possibility of fixing the ship, and they didn't," he said. "They postponed the work and all these people died. I think that's criminal negligence."

No one was ever held criminally accountable, and the victims' families got nothing from the courts.

Even though what happened here 100 years ago remains the largest maritime tragedy in a Great Lakes history, it has largely flown under the historical radar.

Even today, there is but a single marker at the site telling the Eastland story.

"The historical marker serves a purpose," Wachholz said. "We need to do something more so that more people know something happened here 100 years ago."

The city is considering that. There is a newly dedicated monument to the Eastland's victims at the Bohemian National Cemetery where 150 were laid to rest after the tragedy.

"We'd like to think that it brings a sense of peace and recognition of this event so that their lives are no forgotten," said Chuck Michalek, Bohemian National Cemetery volunteer.

Survivor Ida Anderson wished the same when she wrote, "May our lives be nobler and better for this dark, bitter hour of pain. Take heart my dear friend in the dawning. We shall meet our loved ones again."
Related topics:
loop
Copyright © 2020 WLS-TV. All Rights Reserved.
RELATED 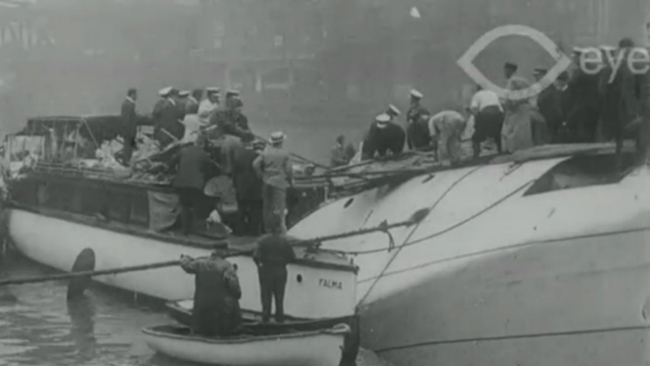