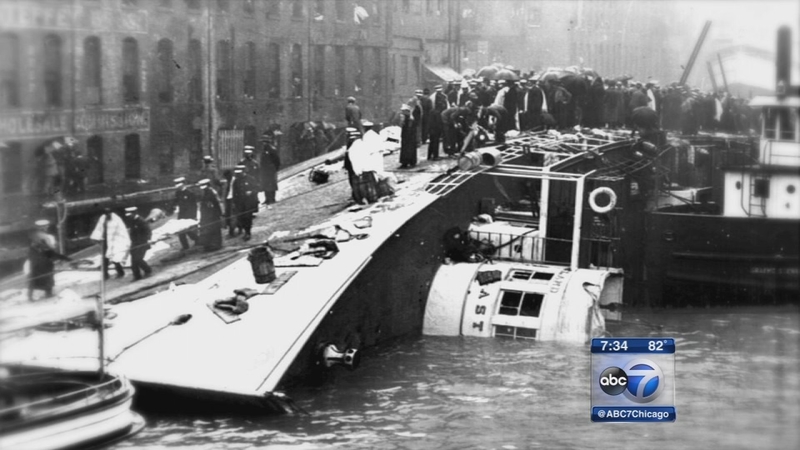 CHICAGO (WLS) -- One hundred years ago, a ship called The Eastland rolled over on the Chicago River, killing 844 people onboard. The Eastland Disaster is the deadliest in Chicago's history.

Richard Lindberg's grandfather, a poultry dealer, tossed chicken grates into the river so that those struggling in the water following the Eastland disaster would have something to grab onto.

"And as he was crossing the bridge, the Eastland capsized," Lindberg said.

Andrew Johnsen still has the heavy diving slippers worn by his grandfather, one of the divers who had to recover bodies of the victims.

"These have been hiding in my garage for very many years," Johnsen said.

"I think it's important to not forget," she said. Wickstrom came from Minnesota for Friday's memorial.

There were songs, books, websites and a newly, re-discovered film from a century ago. The worst maritime loss of life in Great Lakes history does not have a permanent monument, which is something that could change.

Architect Oscar Leon has a concept of bronze statues, images of the disaster, along with a huge umbrella with the names of victims within. There are other ideas, too. Whatever is chosen must complement the Chicago Riverwalk and win city approval.

"It's a concept, an idea, and of course the big question is where to the funds come from?" Chicago Alderman Ed Burke said.

The Eastland Disaster inspired great passion and reverence even 100 years later. So many victims. So many stories.