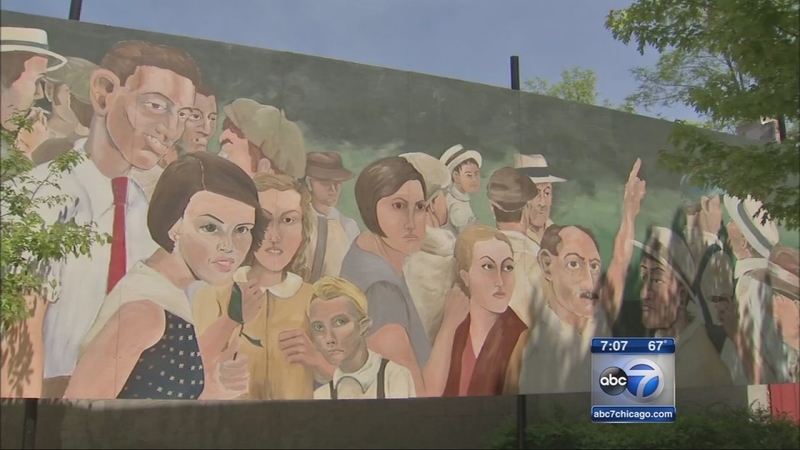 ELGIN, Ill. (WLS) -- An artist in Elgin is defending a public mural that depicts a photo of a 1930 lynching. Artist David Powers says his work was intended to start a dialogue about history, but some residents want it removed. It has been up for 10 years.

Powers says the mural started with the book "Without Sanctuary," which depicts the history of lynchings. He says the mural uses five photographs from the book.

The mural has been around for a decade in downtown Elgin, but there is now a new demand.

"We want the painting down and we want it down now," says Sequandra Haugabook.

There is not consensus on whether the mural should be removed.

"I think it shuld stay up," says Richard Farr.

Farr, also an artist, and his friend recently noticed the mural is the bottom half of a 1930s photo of two men lynched in Indiana. Some call the mural art.

"Art teaches," says Inez Tornblom. "Besides sparking a discussion, art teaches and this is history."

"It's racist. He knew when he was painting it; the whole portrait," says Katina Jefferson.

Powers explained the mural, saying, "I have never shied away from the world. A society that does not talk about history is doomed to repeat itself. You have to understand it so you don't repeat it."

To some, that explanation doesn't matter.

"I'm feeling a lot of pain and hurt because I thought we came a long ways, but truly we haven't - now they are hiding behind paintbrushes," says James Miller.

"If people are upset, we need to talk about it," says Stacey Jones.

When told of the reaction, Powers asked, "Are we too sensitive in the 21st century that we can't talk about this?"

Thursday, directly in front of the mural, there were several conversations, and the city of Elgin plans to hold two meetings to discuss the mural's future.

The artist's context is enough for some.

"Now that I know the reasoning behind it, yes, it should stay up," says Farr.

But not everyone agrees.

"We just want it down because it represents something that our city does not stand for," says Jefferson.

Another mural created by Powers is not disputed, and residents say it depicts the city. Thursday Powers called city officials "total cowards," and said "they'll crumble like a cheap suit and hang me out to dry."