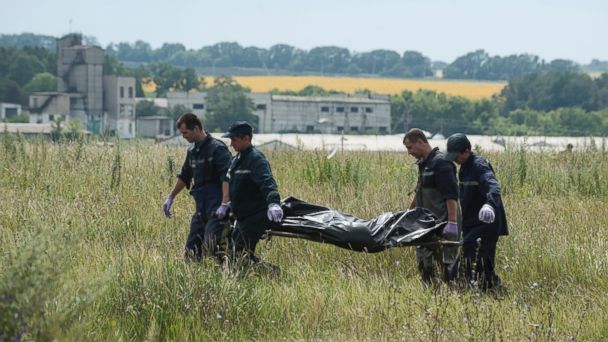 HRABOVE, Ukraine -- We're back at the debris field of Malaysia Airlines MH 17 as the sun is setting.

The bodies are gone and the emergency workers established a perimeter, only to abandon it less than an hour later. We weren't immediately allowed to get up to the wreck like before, but it is now totally unguarded.

The rebels were even off in their tent and not patrolling the area.

To my untrained eye, this looks like exactly the type of thing investigators would not want -- evidence being moved.

Who Are Pro-Russian Rebels Implicated in Missile Strike on Airliner in Ukraine?

All of the bodies we spotted Friday were still laying among the wreckage nearly 48 hours after the crash.

It's been raining. The smell is different today.

Anywhere else in the world, this crash site would be sealed off and crawling with investigators.

Journalists, rebels and a few emergency workers are the only ones here this morning.

As we pulled away, investigators arrived to begin removing the bodies.