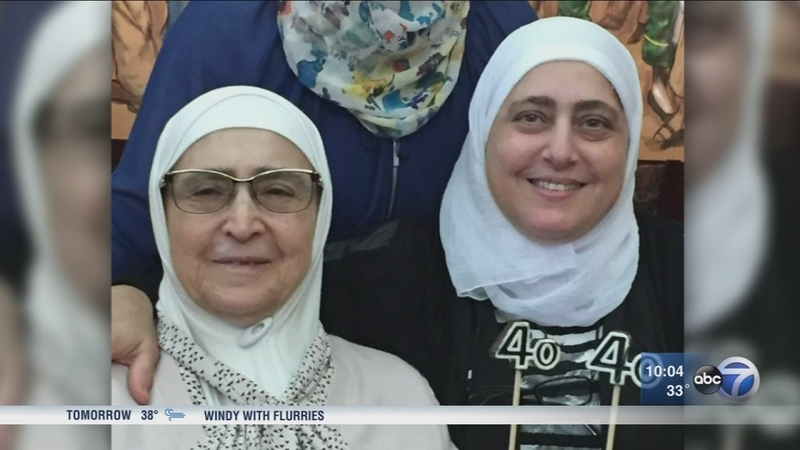 CHICAGO (WLS) -- Refugees and citizens alike have had their families splintered by President Trump's travel ban targeting seven Muslim-majority countries, and some refugee families who have endured years of vetting were stranded abroad days before their resettlement.

In Valparaiso, a family is caring for one relative while missing another.

"This is just a nightmare I'll wake up from, and this is not true. This is not happening. I wish I can do that," said Nour Ulayyet.

Nour's sister, Sahar Algonaimi, was blocked from entering the U.S. Saturday, after landing at O'Hare on a flight from the Middle East. She had traveled to the States to visit her mother, who is sick with cancer.

"My aunt is one of the kindest souls that I've ever encountered in my life. And the fact that she's grouped with this idea of terrorism or harm to the country, that really makes me sad," says Maria Ulayyet.

Sahar is a 58-year-old schoolteacher who lives in Saudi Arabia and had a valid U.S. visa, but was stopped because of her Syrian passport even though she does not live in Syria. After hours of waiting, the family got a call from a customs agent who told them she would have to fly back to Saudi Arabia.

"I was hearing her pleading with them, asking them, 'Just let me see my mom. I'll give you a hundred dollars. Can you please go buy her flowers, and send her flowers from me,'" Nour said.

Monday the White House defended Trump's immigration order, which bans entry by refugees and travelers with visas alike from seven Muslim-majority countries, and how it was implemented.

"It's a shame that people were inconvenienced, obviously, but at the end of the day we're talking about a couple hours," said Press Secretary Sean Spicer.

"We cannot rewind the time and have my sister be with us. I know the harm is already done," Nour said.

Refugees and citizens alike have had their families splintered by President Trump?s travel ban and some refugee families were stranded abroad days before their resettlement.

Sahro Moalim is a refugee. Separated from her family, she escaped war-torn Somalia when she was just 16-years-old.

"You have to save your life and you have to go where you can have peace," Maolim said.

Now 23, Maolim was lucky enough to be found by Heshima Kenya, an organization that rescues underage children in East Africa. They helped relocate her to Chicago in 2014, and were hoping to get her family - who they recently identified - here as well. Trump's ban put all those dreams on hold.

"That is heartbreaking for us," she said.

A Syrian family scheduled to arrive Feb. 6 already had an apartment set up and ready to receive them. They had been living in a Turkish refugee camp for the past few years and were being sponsored by members of Epiphany United Church of Christ in North Center. Those members have now been told the family will not be coming.

"We were so excited after nine months of really preparing for this. All of a sudden it just went away, and how devastated the whole congregation is can't even compare to what the family must be feeling after they've been waiting for years," said Desiree Winkle, parishioner.

Paster Kevin McLemore spent his childhood in Indonesia; the executive order is personal to him.

"The idea that somehow Christian lives matter more than Muslim lives is abhorrent and antithetical to who Jesus was and what he taught," he said.

At least 15 refugee families were scheduled to arrive in Chicago over the next three weeks. At this point, ABC 7 Eyewitness News has been told only those not on the list of banned countries will be allowed in.
Related topics:
chicagonorth centerdonald trumpbanimmigrationrefugeessyria
Copyright © 2021 WLS-TV. All Rights Reserved.
More Videos
From CNN Newsource affiliates
TOP STORIES