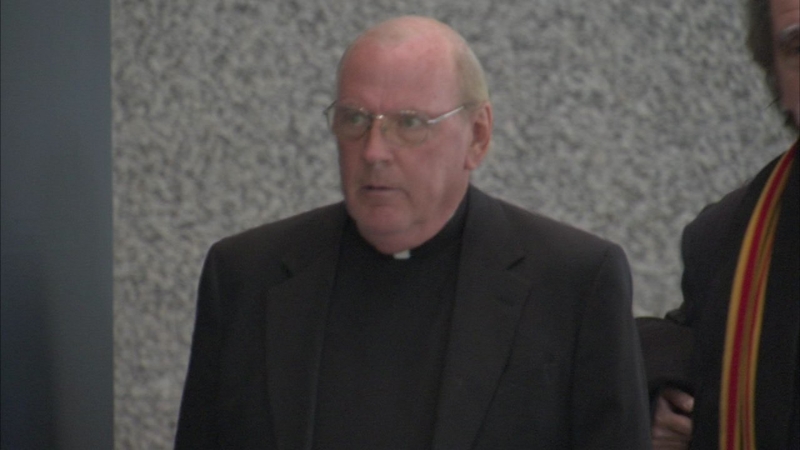 CHICAGO (WLS) -- Federal prosecutors in Chicago want to send a Roman Catholic priest to prison for five years for a crime that involved the Chicago mob and a plot to steal a priceless violin.

Father Eugene Klein wore a Roman collar, but the story line is less God and more godfather. The elements resemble a mafia movie: secret messages from prison, a violin stashed in a vacation retreat, and a priest recruited by an outfit hitman. But the trailer is about to come to an end on Thursday, when Father Klein is sentenced for helping a late mob boss in solitary confinement.

For Chicago mob boss Frank Calabrese, killing was a breeze, hence his nickname "Frankie Breeze". In 2011, Calabrese was at a Missouri penitentiary doing life for 13 Chicago mob hits in the Family Secrets case. He was considered a security risk and held in solitary confinement when prison chaplain Father Klein became more than a spiritual advisor.

Klein plotted to help the outfit boss recover a rare, centuries-old violin that Calabrese had hidden years earlier here in his Wisconsin summer home. The plot was aimed to prevent U.S. authorities from finding the violin and selling it to pay off the mobster's debt to society.

But that's not all he did. Now authorities say Father Klein told Frank Calabrese where Nick Calabrese - his brother and the key witness in the case - was living while he was in the witness protection program.

According to a court filing Monday, prosecutors want to send the priest to prison for the maximum five-year sentence because they say he had clear disregard for others and for the trust placed in him, and that new information Klein revealed to Frank Calabrese about the location of his brother, Nicholas, "knowing that Nicholas had cooperated against his brother and was in grave danger as a result."

Durkin told the I-Team: "They recommend no more than six months for Dennis Hastert and ten times that amount for Fr. Klein. That is absurd."

"This latest revelation that the priest, the defendant, tried to help identify the location of a witness that's a bombshell and that can explain why the government is seeking so much time because it undermines the witness security program," said ABC7 Legal Analyst Gil Soffer.

During trial, Frank Calabrese threatened to kill a U.S. prosecutor. The mobster was considered a ruthless killer and a dangerous prisoner.

Soffer says Father Klein used his religious position to help Calabrese communicate with the outside world - conduct he says resulted in the government asking for such a lengthy sentence.